I really enjoy working with the young spinners – I’ve mainly done that in India with RCB, said Daniel Vettori.

Former New Zealand cricketer Daniel Vettori, who has been with the England Performance Programme in Dubai, said he was impressed with England’s spin reserve.“So far so good. I knew Stephen Parry and I’d seen Danny Briggs bowl, but I hadn’t seen Liam Dawson or Tom Westley bowl before. But it’s been great actually. I’ve really enjoyed being around them, they’re all really keen to learn. That’s what you want as a coach when you come and talk to them, and they all seem really appreciative.” ALSO READ: Daniel Vettori to mentor young spinners for English and Wales Cricket Board (ECB)

“To get to this level you’ve obviously got to have some skills, and part of being a finger spinner is that you’ve got some wits about you. It’s a tough game and you’ve got to stay ahead of those batsmen, and generally you do that through your tactical nous. They all seem to have it pretty well,” said Daniel Vettori. He has to his credit more than 700 international wickets and was identified by EPP Head Coach Andy Flower and ECB lead spin coach Peter Such as the ideal person to share what he has gone through with that group of young spinners.

“Andy Flower got in touch, and told me about the camp that was going on,” says the 36-years-old, who had retired after the World Cup final. “They wanted to bring some spinners out, and wanted me to work with them. It sounded appealing at the time. I really enjoy working with the young spinners – I’ve mainly done that in India with RCB and there have been a couple of good young ones come through. It’s probably the bit about coaching I’ve enjoyed the most. So it was an easy decision.”

This winter, the EPP has drawn attention for the white-ball cricket and as per Vettori, the first class cricket lacks spinners. “I think so,” he said. “The big thing I talk about is being able to control the game as a spinner. That’s the hardest thing to do because there’s so many things coming against you, particularly for a finger spinner in this day and age with how aggressive batsmen are, how small the grounds are, all the stuff that everyone knows. How can a spinner stay relevant and stay a force within the game?

“For me that’s all about controlling the game as much as they can. That can go through all three facets of the game.” Vettori will be present with the Lions coaching staff till next Wednesday and will witness the spinners play UAE tomorrow. He will also witness the first Twenty20 match next Monday. After that he will continue for Brisbane, for his first Big Bash League campaign as head coach. 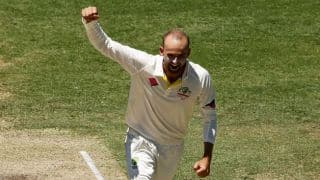