Colin Munro-inspired New Zealand completed their 2-0 series win over Bangladesh in the three-match T20I series with one more game left, on Friday. Chasing 196 at the Bay Oval in Mount Maunganui, Bangladesh produced a poor show with the bat and were bowled out for 148 in 18.1 overs, with Ish Sodhi claiming 3 wickets whereas Ben Wheeler and Kane Williamson bagging 2 each. In their chase, Bangladesh batted poorly and kept losing quick wickets which hampered their chances. Sabbir Rahman and Soumya Sarkar did manage to get the visiting party in the game but fall of wickets on a regular basis downed their effort. New Zealand, on the other hand, remained on top due to their fielding and catching that was helpful in keeping a lid on the Bangladesh batsmen. Bangladesh s tailed tumbled which led to New Zealand winning the second match by 47 runs.

Bangladesh started poorly losing Imrul Kayes for a duck in the very first over. Kane Williamson opened with Mitchell Santner, a decision that produced instant result. Kayes, trying to slog-sweep Santner, could only manage a thick top edge straight into the hands of Tom Bruce. Tamim Iqbal and Sabbir snitched up a vital stand of 32 runs for the second wicket. Tamim was involved in a mix-up with Sabbir that resulted in the senior batsman getting run out for 13.

Shakib Al Hasan came out and went back in the pavilion in no time, giving a simple catch to James Neesham at extra cover. This was the third T20I wicket for Ben Wheeler playing in his second match for New Zealand.

It was Sabbir and Sarkar who added stability to their faltering innings. Sarkar took a liking to Sodhi, cantering the spinner for 16 runs in his first over. Meanwhile, Luke Ronchi suffered a groin injury while stopping a single. Back-up keeper Tom Bruce took over duties.

Sabbir and Soumya continued to pull off sixes at will against Colin de Grandhomme in particular bore the brunt of it. De Grandhomme clearly looked under pressure after giving away 21 runs in his second. The pair also notched up their 50-run stand in just 29 balls.

Sarkar s 39-run knock came to an end after he fell for the slow bounder trap by Trent Boult. Sarkar could not generate pace off the bat ended up giving a simple catch to Munro at short fine-leg. This also ended the 68-run partnership for the fourth wicket.

Sabbir s stay in the middle too was short-lived as he mishit one off Sodhi straight into the safe hands of Boult at long off. Sabbir added 48 off 32 balls that included 3 fours and that many sixes. Soon, Bangladesh had Mahmudullah and Mosaddek Hossain in the middle, as the visitors needed another 78 off 42 balls.

Hossain got out for 1 after a half-tracker by Williamson was chipped into the hands of a leaping Santner.

Sodhi picked up two more wickets in his final over as both Mahmudullah and Mashrafe Mortaza got fdismissed trying to hit the bowler over the top. Mahmudullah added 19 off 15, while Mortaza made just 1. The downfall continued as Nurul gave Williamson his second wicket giving a second catch to Boult in as many deliveries. Wheeler came into the attack and got rid of Rubel Hossain for 1 to hand New Zealand a 47-run win over Bangladesh in the second T20I of the series.

Wheeler and Williamson ended up with 2 wickets apiece while Santner and Boult picked one each. Sodhi was the star bowler picking 3 for 36 from his 4.

Earlier, Bangladesh, after winning the toss, asked the home side to bat first once again on a flat surface where Munro and Tom Bruce ran havoc. Munro knocked up a whirlwind hundred off just 52 balls, while Bruce, notched up his first T20I half-century. It was only some intelligent bowling in the final overs that kept the flow of runs under check. Rubel ended with figures of 3 for 37, with Mortaza, Hossan and Shakib picking one wicket apiece.

The third and final T20I of the series will be played at the same venue on January 8. 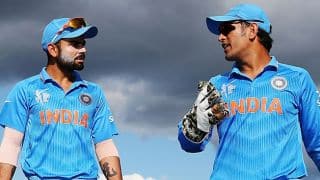