Colin Munro came to open the batting went on destroying the West Indian bowlers scoring 50 off only 18 balls.

West Indies had a good start to the second T20I after they put New Zealand in. They managed to get the wicket of Martin Guptill in the first over itself. However, Colin Munro, who had opened with Guptill, then went on destroying the West Indian bowlers. He reached 50 off only 18 balls. Munro now has reached fifty in fewer than 20 balls more than once. Only David Warner and Glenn Maxwell have done this before. This half century was also the fourth-fastest in T20Is. Munro hit 4 consecutive boundaries off Kesrick Williams before getting out. Munro hit 11 fours and 3 sixes in all.

New Zealand lead the 3-T20I series after winning the first game by 47 runs. Munro didn’t fail to score in that match either. he made 53 of 37 balls after Guptill was dismissed early. Munro also had a very good series against India last year. His quick runs in the second T20I helped New Zealand to score 86 runs in the Powerplay overs. New Zealand are 102 for 4 after 9 overs. Play was then stopped due to rain. 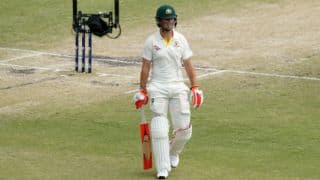