Mushfiqur Rahim contributed with a good 33 while Perera finished things off on a positive note for the Bulls, with 1.3 overs still remaining.

Barisal Bulls register their first win in the ongoing Bangladesh Premier League (BPL) 2016 as they defeat Comilla Victorians in Match 6 at the Shere Bangla National Stadium, Mirpur, Dhaka. Victorians, who are the reigning champions of the domestic Twenty20 (T20) league, have had a disappointing run so far losing both their fixtures including the one today while the Bulls have bounced back after starting their journey with a loss and now winning the low-scorer by 6 wickets. LIVE CRICKET SCORECARD: Comilla Victorians vs Barisal Bulls, BPL 2016, Match 7 at Mirpur

Comilla Victorians won the toss and elected to bat first. Imrul Kayes along with Khalid Latif opened the innings for the Victorians while Taijul Islam opened the bowling for the Bulls. Victorians got their first success in the very first over as Kayes was sent back for a duck. The team kept on losing wickets frequently and had lost 3 wickets before they reached the team score of 50. They continued hitting hard despite losing Kyaes early. Latif departed for 12 while Nazmul Hossain Shanto soon followed him for a run out for 16.

Players like Liton Das and Imad Wasim departed for single-digit scores while it was Marlon Samuels who added some crucial runs. He was the highest run-getter for the side with his run-a-ball 48 with five boundaries. Samuels’ innings came in as a saviour as the side reached the team total of hundred. More contributions came down-the-order as Sohail Tanvir played an innings of 30 off 19 and remained not out. The innings included three sixes and helped his side put up 129 for the loss of 8 wickets at the end of their play.

Mushfiqur Rahim’s captaincy was one of the reasons behind the success of Bulls’ bowlers. His changes in bowling were positive and fruit-bearing and the opponents went on throwing wickets. The other factor that helped the Bulls was their fielding as two of the dismissals were run outs.

It was a combined effort from the Bulls bowlers and each of the five bowlers got wickets. Abu Hider Rony was the most successful of them all, bagging a couple of wickets while the rest had one wicket each.

Bulls’ innings was opened by Dilshan Munaweera and Shamsur Rahman. Though they did not lose a wicket as early as their opponents, their opening partnership was not as strong as it was expected to be. They lost their first wicket with 19 runs on the board as Munaweera departed for 15. Shamsur followed him for 16 runs. Dawid Malan was the next man in but he could not pull of any heroics, getting out for 26. The Bulls also kept on losing wickets and their innings was pretty slow compared to that of Victorians, who, despite losing wickets, scored runs faster.

Mushfiqur played a crucial role with the bat as he built up a good partnership with Thisara Perera. The target was not a very big one and it was easy for the two experienced batsmen to take their side to victory. Mushfiqur contributed with a good 33 while Perera paced up the innings after his departure, hitting frequent boundaries and finishing things off on a positive note for the Bulls, with 1.3 overs still remaining. 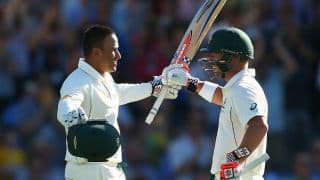