Commentary box sledging: Sourav Ganguly and Rahul Dravid get involved in a friendly war of words

Commentary box sledging: Sourav Ganguly and Rahul Dravid get involved in a friendly war of words

India toured England in 2014 and during the first Test at Nottingham; once again the tail came to haunt the visitors. From 298 for nine, England had recovered to 460 for nine by then and while the Indian team didn’t give the fans any reason to smile, the commentators did.

Right since their great debut together in Lord’s, Sourav Ganguly and Rahul Dravid, have over the years given Indian fans many moments of joy. The two former captains having played together since 1996 and along with Sachin Tendulkar have shouldered the burden of Indian batting for years, leading to the golden years for Indian cricket.

They may not be playing cricket anymore but they still remain close to every Indian cricket fan’s heart.  The above video is an absolute gem; it is not often that we hear Sourav Ganguly and Rahul Dravid, having a go at each other. They wielded the willow like wizards, but on this occasion the discussion was around their bowling.

While England’s Joe Root continued to build the partnership with number 11 batsman James Anderson, on commentary, Ganguly, Dravid and Harsha Bhogle discussed India’s famous win at the same venue in 2007.

Bhogle came up with some stats on the bowling figures of Ganguly and Tendulkar from the same Test series in England, where Dravid was the captain.

The stats showed that Ganguly had bowled less overs than Tendulkar in the series, and then began the banter in the commentary box.

Dravid: “I was just trying to figure out how many overs I gave to Tendulkar and Ganguly (in 2007). Maybe I under bowled Ganguly there, but Sachin had more Test wickets.”

Ganguly: “He (Dravid) always does that.”

Bhogle: (coming up with a quick stat) “Tendulkar has more wickets than Ganguly.”

That’s true but Ganguly has 32 wickets in 113 matches while Tendulkar has 46 wickets in 200 matches. Ganguly doesn’t boggles down with that bit of stat.

Ganguly: “That’s because he (Tendulkar) bowled half his overs on turning pitches in India.”

Bhogle: (appreciates) “I like how you (Ganguly) are sticking to your territory.”

Ganguly: “Those turning pitches on day five in India. Those dust bowls. I wish I knew how to bowl a little bit of spin. That’s on flat batting pitches. On good pitches where you needed skill, look at the economy (referring to his economy rate of 2.3, in India’s tour of England in 2007). I did the perfect 5th bowler’s job.”

He just doesn’t shy away from boasting his skills.

While Ganguly and Bhogle conversed, Dravid quietly listened. Not known for his bowling, Dravid delivered a bouncer to Ganguly with words.

Dravid: “Sanjay Manjrekar made a really good point in the commentary box. If Ganguly had been a yard quicker and just a little bit fitter, he would have been a match-winner.”

Ganguly played that with a cross bat.

Ganguly: “I wish I was Prime Minister of India. I could have done a whole lot of things.”

Bhogle didn’t want to get into the conversation at all and urged Dravid to stage a comeback in the battle of words.

Bhogle: “I almost feel like not getting into this conversation. I’m getting away, this is some serious sledging. Come on Rahul, don’t be a good boy here.”

Desperate to prove his point, Ganguly grappled hard by recalling the 2007 Nottingham Test.

Ganguly: “Ask Rahul Dravid. When he won the toss at Trent Bridge in 2007 in our famous Test series win, England were going at almost six an over, who did he fall back to?”

Dravid doesn’t deny but adds a little flavour to the response.

An agitated Ganguly asked for a judgment.

Ganguly: “I would request the production team to get the spell out and we need a judgement here.”

Dravid: (interrupts and adds) “Don’t forget the speeds as well.”

Bhogle: “One thing you got to admit Rahul, he (Ganguly) does know his numbers.”

Dravid: “I’ve never doubted that. His numbers and the numbers of any left-handed batsman in the world, Sourav knows.”

This time the southpaw played it with a straight bat.

Ganguly: “He (Dravid) must have been happy that he had a player with intensity in his team. A player who cared for the numbers and the game. That’s what you look for as a captain.”

Bhogle seems to enjoy the discussion and finds out a possible reason for Dravid under-bowling Ganguly.“

Bhogle: I think there’s a reason he (Dravid) under bowled you (Ganguly). As a captain, you made him keep wickets.”

The typical good boy in Dravid tries to douse the fire.

Ganguly concluded the banter with a tight forward defence.

Ganguly: “He (Dravid) did a job for the team and I desperately needed him to do that. We became a better team after that.”

Purely a ‘sledging’ delight between two of India’s most loved and celebrated cricketer. 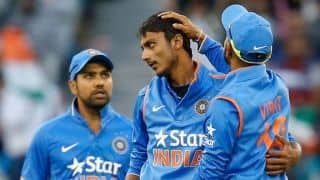