Harmanpreet feels the conditions in the West Indies will throw a different set of challenges for India during the Women's World T20.

Captain of the women’s cricket team, Harmanpreet Kaur feels the conditions in the West Indies will throw a different set of challenges for India during the Women’s World T20. Harmanpreet, writing in a column for the ICC on Thursday, termed the wind in the Caribbean a pivotal factor. With the sea being close to most of the stadiums, and not many tall buildings available in the surrounding, things can get tough for players.

“Wind is a big factor in the West Indies. It doesn’t just affect high catches, it makes a difference as a captain, bowler and batter,” Kaur wrote. “We have to think about which end to use which bowler from, and from which end which shot makes more sense. That’s one of the things we will have in our plans going into this tournament.”

While conditions in West Indies are somewhat similar to the ones in India, Harmanpreet, who has scored 1703 runs and taken 24 wickets in 88 T20Is, is aware of the slowness of the surfaces there. “The Caribbean has some very unique conditions, and we will be playing those as much as the opposition. Judging by scores in their local tournaments, the pitches seem to be a bit on the slower side,” she said. “All of our matches are in the afternoon, so dew should not be a factor for us as much, but if it’s there, there may be a bit of grip in the evening.”

India, quarter-finalists in the last World T20 in 2016, will open their World T20 campaign against New Zealand on November 9, followed by the much-anticipated clash against arch-rivals Pakistan two days later. India are ranked third in the world, a result of their consistent performances in ODIs, and Harmanpreet believes that it is because of this promising run that people in India will have high expectations from them.

“The ICC Women’s World T20 2018 is the first ICC tournament after the World Cup 2017, so I think a lot more Indians will be following our team. It’s a good feeling. Now the expectations will also increase, but that’s good for the team as well,” she wrote. “In the past, we would see a few teams dominate others in T20 cricket. Now every team has two or three hitters who can change the game at any moment. You just can’t take anyone lightly.

“So I think the ICC Women’s World T20 2018 will be a good tournament, and an important tournament, especially for India. If we play well as a team, we can hope for a good performance like last year.”

That said, the skipper pointed out that all teams were pretty evenly-matched and refused to predict a clear winner. “All the teams have done well in the last two to three years, so there isn’t really a top-three anymore,” she said. “We will have to give our 100 percent every game. We can’t take it easy, there are no games we can try anything in. It is going to be about playing our best XI every time and taking things game by game.”

India are coming off a series win in Sri Lanka in both ODIs and T20Is and Harmanpreet feels the result bodes well for India heading into the tournament. “We had a good series in Sri Lanka, where we got a chance to back some of our younger players,” she said.

“It was important to give them the freedom in that series, give them every opportunity. When a player is young, it’s important to back them up, especially bowlers in the T20 format, where they are always under pressure. The focus was very much on the bowling on that tour, and I’m glad to see how the girls responded. Our coach Ramesh (Powar) sir has done a great job with the bowlers.” 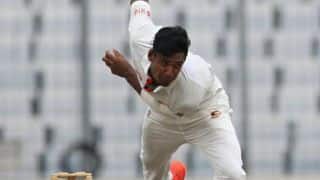