The Indian cricket team's nightmarish tour of England showed no signs of getting better as the injury-hit side went down by seven wickets in a rain-curtailed second one-dayer. 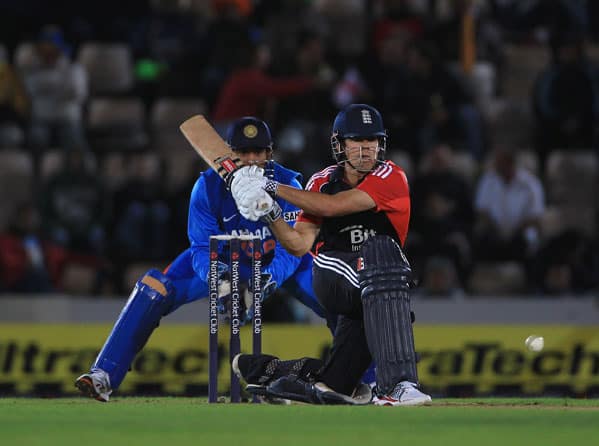 The Indian cricket team’s nightmarish tour of England showed no signs of getting better as the injury-hit side went down by seven wickets in a rain-curtailed second one-dayer.

England rode on captain Alastair Cook’s unbeaten 80-run knock to register the win, while chasing a competitive 188 for victory in the 23-over-a-side match on Tuesday night.

Cook led from the front with a knock that came off 63 balls to help England overhaul the target with five balls to spare.

But it was Craig Kieswetter who got England’s run chase off to a blistering start with a 25-ball 46 during which he hit four boundaries and three sixes.

Ian Bell (25 off 16) and Ravi Bopara (24 off 20) also made useful contributions in the home team’s successful chase.

Off-spinner R Ashwin was the most successful bowler for India picking up two wickets for 42 runs while R Vinay Kumar (1/33) accounted for the other English wicket.

While Parthiv and Rahane yet again gave India a good start, it was Raina who provided a stirring finish to the visitor’s innings with a fiery 40 that came off just 19 balls.

England are now 1-0 up in the five-ODI series with the next match scheduled at the Oval on Friday. The first game at Chester-Le-Street was abandoned due to rain.

England’s run chase got off to a flier with Cook and Kieswetter putting on 67 runs for the opening wicket in no time.

From the onset, Kieswetter was in a murderous mood as two of his three sixes came off Ashwin’s opening over.

The Indian bowlers were sent on a leatherhunt by Cook and Kieswetter as England raced off to 50 in just five overs.

Kieswetter fell just four runs short of his half century, lbw to Viany Kumar in the seventh over.

New man in Bell, playing his 100th ODI, creamed off 25 with four fours before holing out to Virat Kohli at short extra cover off Ashwin’s bowling.

But England, already 100 up in the 10th over, were holding all the aces.

The Indians were also hampered by the absence of a regular fifth bowler as Kohli and Raina gave away 35 off their four overs.

After Bell’s dismisal, Cook and Bopara put on 60 off 48 balls for the third wicket before the latter departed caught by Kohli while trying to lift Ashwin over the cover.

But it hardly made any difference to the outcome of the match as by this time England, at 162 for three in the 19th over, were already well on their way to an easy win.

Earlier asked to bat, Parthiv stole the limelight in the beginning by giving India a scintillating start.

The left-hander was particularly severe on Bresnan as after picking up 10 runs of the first over, he hammered the pacer for two sixes and a four to pick up 16 of his next.

However, his cameo came to an end in the fourth over when he got a faint edge off James Anderson to Kieswetter behind the stumps.

Parthiv, who made 95 in the first ODI, hit three fours and two sixes during his adventurous stay at the crease.

After Parthiv’s dismissal, young Rahane and Dravid took the onus to keep the run rate up as India reached 50 in the seventh over.

After the bright start, Rahane and Dravid shared 79 runs off just 68 balls for the second wicket to lay the foundation for India’s total.

Rahane was the aggressor among the duo and found the boundaries at will, while Dravid played the role of sheet-anchor dealing mostly in singles with occasional fours in between.

Rahane again batted delightfully, pulling and lofting England bowlers, be it pacemen or spinners, at will.

Rahane’s first shot of fury was a pull off Stuart Broad that went many a rows back over the midwicket fence.

When Broad pitched it up, he lofted him over extra cover.

The right-handed batsman reached his half century from 40 balls with five fours and a six in the 16th over.

However, India lost Dravid an over before Rahane’s personal landmark when the veteran batsman tried to slog-sweep Swann and was smartly caught at midwicket by Anderson.

India lost their third wicket in the 17th over when Virat Kohli (9) hoisted Swann into the hands of Bell at long-on. But Raina immediately made his presence felt when he smacked Dernbach straight into the long-on stands.

Rahane, well past his 50, sought a runner in the 19th over but the move didn’t work as he fell soon, caught by Swann off his own bowling. He struck five fours and a six.

The Indians opted for two overs of batting powerplay in the 20th over with Raina and captain Dhoni at the crease with the scoreboard reading 144 for four.

It paid rich dividends as Raina hit Dernbach for a six and two fours to pick up 16 runs of the 20th over.

Dhoni (6) then slammed Bresnan for a four to midwicket fence but fell in the next ball while going for his trademark helicopter shot, caught by Bell in the deep.

India s wait for their first win on this England tour got extended as England romped home with a win in the second ODI against India at the Rose Bowl on Tuesday.

England captain Alastair Cook scored an unbeaten half-century to guide England to seven wicket win to go one up in five-match series.

For India only R Ashwin managed to put up a impressive performance bagging two wickets for 42 runs.

Earlier, Ajinka Rahane hit 54 and Suresh Raina 40 as India made 187-8 in their 23 overs in the second one-day international here at the Rose Bowl on Tuesday.

The match was shortened because of rain and Rahane and Raina, were in Twenty20 mode, facing 47 and just 19 balls respectively, after India were put in by England.

Graeme Swann – returning after a stomach bug – was the pick of the England bowlers taking 3-33 from five overs.

Parthiv Patel and Rahane shared an opening partnership of 30 with Patel being particularly harsh on Tim Bresnan who conceded 26 from his first two overs.

The highlights of Patel’s brief innings were two big sixes lofted over midwicket in the same over from Bresnan which he took for 16 runs.

When Patel was caught behind off James Anderson he had contributed 28 of the 30 runs, made from just 18 balls, but his dismissal was the cue for Rahane to accelerate his personal run rate.

Rahul Dravid, playing in his final one-day series and the only one of India’s so-called galacticos to be in the side, kept pace with his partner in a stand of 79 for the second wicket.

The veteran fell victim to a sharp catch by Anderson off Swann at short midwicket and Swann struck again shortly afterwards when Virat Kohli holed out in the deep.

But Raina continued smashing the ball to all parts finishing with three fours and three sixes as India posted a commanding total.(AFP)