Dejected England captain Alastair Cook said it would be difficult for him to lift his side in the remaining two ODIs against India after it conceded a 0-3 lead to the hosts. 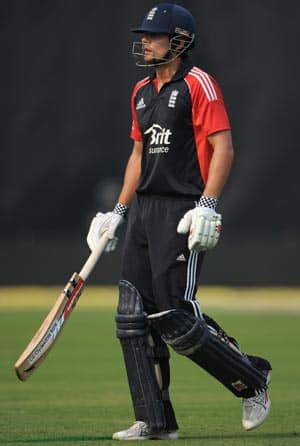 Dejected England captain Alastair Cook said it would be difficult for him to lift his side in the remaining two ODIs against India after it conceded a 0-3 lead to the hosts.

“Two more games to go but it’s tough to pull up when you know the series is lost,” Cook said after the five-wicket loss in the third ODI during which England failed to defend 298 last night.

“We made too many mistakes against a world-class side and that’s frustrating. The score of 300 was a decent one. It was defendable but mistakes on the field cost us the match.”

England committed numerous errors on the field with wicket-keeper Craig Kieswetter guilty on two occasions a dropped chance of Virat Kohli and then a missed run out opportunity of Ravindra Jadeja, who in captain Mahendra Singh Dhoni’s company, brought India home.

“We prepared for the series as well as we could but just couldn’t deliver on the field,” said Cook.

He praised Indian skipper Mahendra Singh Dhoni, terming him as one of the best finishers of the game.

“(Finishing abilities) that’s why M S (Dhoni) had a fantastic career. He made his career by finishing off games,” he said.

Cook also had words of appreciation for Jonathan Trott, who shaped the England innings with an unbeaten 98.

“Trotty (Trott) played the anchor role. We needed batsmen to play around him.”

The English skipper observed that in the absence of Stuart Broad (injured) and James Anderson (rested), the young English attack failed to rise to the occasion.

“Broady (Broad) can’t be here because of injury and we decided to rest Jimmy as part of our long-term planning. It was an excellent opportunity for other bowlers to perform in Indian conditions,” he signed off. (PTI)