Architect of England's win in the second ODI against India, captain Alastair Cook had thought of sitting out of the game after rain interruptions almost made it Twenty20, a format in which he hasn't quite made a mark so far. 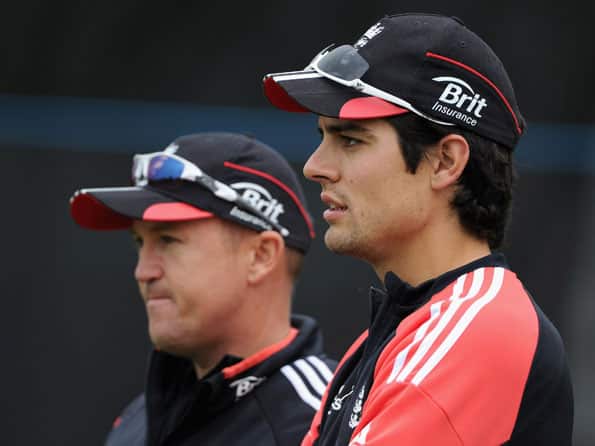 Architect of England’s win in the second ODI against India, captain Alastair Cook had thought of sitting out of the game after rain interruptions almost made it Twenty20, a format in which he hasn’t quite made a mark so far.

“That was mentioned (in the dressing room) but in one-day competition, you are not allowed to bring in new players. I am pleased with my form and it shows the kind of right work I am doing. There is still huge amount I can improve. Hopefully I can keep doing it,” Cook said in the post-match press conference.

Even though Indians ran up a good total, Cook believed it was only a par score on a very good batting wicket at Rose Bowl.

“We thought it was a fantastic wicket to bowl given it was under cover all day and night and it was raining and cloudy. But it didn’t do anything and just skidded on nicely.

At half way stage we thought it was a par wicket and the target was very gettable…it was proved the way we chased it down,” he said.

One batter in the England team who bats in similar vein to Cook is Jonathan Trott and the right-hander was left-out of the eleven.

“We needed more attacking batters and that’s why Samit (Patel) played. We had enough batting and we didn’t need it (in a shorter format of the game).”

England are the world’s best in Twenty20 and Test format and their next obvious goal is to be at the top of one-day cricket heap as well.

“It’s a possibility but presently it’s a long way off. We are number five and we have huge number of work to do. We have huge potential but it’s a long time before we get there. We need a lot of hard work but we are desperate to do well and keep improving.”

Indian batters have batted far more freely in one-day internationals than in Tests and Cook believed it’s the format which suits their style.

“It’s a different format. They have a licence to go out and bat. Indian players, I have always said, are very talented and skillful. Our job is to reduce their scoring as much as we can.

“(Suresh) Raina is very hard to bowl at death overs. But we hung in well and did a very good job on a good wicket.”(PTI)

Injuries a big concern for the team, says Dhoni