New Zealand batsman Corey Anderson was dismissed off the bowling off Rahat Ali during the final session of Day Three of the third Test against Pakistan at Sharjah when he attempted to go for a slog down his leg slide, but could not get connect to the ball properly, resulting in Yasir Shah taking a catch in the deep mid-wicket region for Anderson to depart on a score of 50 off 57. It was Rahat’s fourth scalp of the match after conceding 85 runs, with New Zealand losing their sixth wicket for 537 runs.

The Kiwi batsman had brought up his second Test fifty in the previous delivery when he played a rising delivery by Rahat with a flat bat, sent the ball flying over the umpires head for a straight boundary.

New Zealand resumed from a score of 488 for three after tea, and were put on the backfoot when Kane Williamson was dismissed on a score of 192 off 244 deliveries off the very first ball of the final session. Williamson tried to push a rising delivery that was pitched outside off, but managed to edge it to the slips, where the ball landed in the safe hands of Younis Khan. New Zealand soon crossed the 500-run mark, courtesy Corey Anderson’s big hitting. 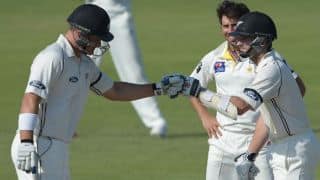