Walsh believes there should be one captain in T20 and ODIs but another for Tests.

“I was travelling and saw it on YouTube, so I can’t say exactly the whole build up of it. It didn’t look a pretty sight when you saw it but in the heat of the moment, these things sometimes do happen. For me it is how it ends. If both players will accept their responsibility in terms of what happened,” Walsh told reporters at the Superpacer event.

“That is not what you want to see on field of play and that is what you want youngsters to watch and think that is the norm. Hopefully things have been sorted out and whatever action needs to be taken has been taken and we can return to normalcy,” he added.

The incident happened during an IPL match between Mumbai Indians (MI) and Royals Challengers Bangalore (RCB) when West Indies all-rounder Pollard hurled a bat at Australian left-arm pacer Starc after the latter delivered the ball to him despite the batsman having backed off from the crease.

The former West Indies skipper said things would be said on field but people want to see controlled aggression. “You are going to have words said from time to time, I have nothing against it. I think controlled aggression is what everybody wants to see,” said Walsh, who took 519 wickets in his 132-Test international career. “You don’t want to see. You don’t want it to get ugly where the fans are looking on or the fans in the stadium think it’s the norm. I have nothing against things being said but everything should be controlled and not get too personal,” he said.

Walsh had shown great sportsmanship during a 1987 World Cup match where he didn’t run Pakistan No 11 batsman Salim Jaffer out, who had backed up at non-striker’s end, and West Indies lost that match. Recollecting the incident, Walsh said, “That was the way I was brought up to play my cricket in the spirit of the game and I would not change that if the same scenario were to present today.” The 51-year-old said all fast bowlers have a mean streak in them to get the batsman out but it doesn’t mean they would hurt them or sledge.

Talking about West Indies Cricket Board’s decision to name Denesh Ramdin as the new captain for Test matches, replacing Darren Sammy, Walsh said, “I don’t know if it is sacking and I am not going to comment on that. He did everything he could when he was appointed captain. I wish him well in whatever he is doing. He said he has retired from Test cricket and that is his call. I want to wish the new captain all the very best.”

Asked if it is good to have separate captains for all three formats of the game, the Jamaican said, “My personal view is something different. I probably would have had the same person captaining in T20 and 50 over and probably someone else for Test. The balance of the team is what they are looking at. We just have to give them a chance to see how it pans out. I am not sure what they are thinking about. I don’t think there is anything wrong with it because other people are doing it as well, so let’s see how it works out.”

Walsh, who shared the new ball with Curtly Ambrose in his playing days, said they complemented each other and it was the best partnership West Indies ever had. “We got off very well. We complemented each other. We didn’t compete against each other. That is how the friendship and the partnership got developed. We worked together as partners to ensure that what we do was for the betterment of West Indies cricket,” he said. The duo shared 421 wickets between them in 49 Tests.

“I am just sorry that we don’t have two youngsters that could take over from us with the same attitude and same work load and insights of cricket. But it was the best partnership that we have ever had. He is just a tremendous person to have to bowl at the other end because of how well we bowled throughout the game,” he said. 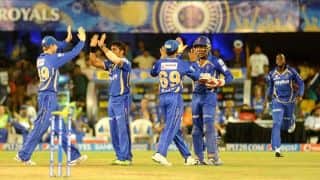