For his hundred Dwayne Smith got the Man of the match award.

Trident’s captain Kieron Pollard won the toss elected to field first as the home team preferred to chase targets. Warriors, the visitors had a excellent start. Both the openers Lendl Simmons and Martin Guptill were aggressive from the beginning. Specially Simmons, who hit four sixes in his inning of 64 of just 40 balls. Guptill made a responsible 55 of 51 balls. The Barbados bowlers looked ineffective in front of them. Their last match’s hero Ravi Rampaul had a bad outing in this match. He gave 39 runs in his four overs with just one wicket to his name.

Jeevan Mendis brought the Tridents back in the game in the 12th over when he picked up Simmons. He also picked up opposition captain Denesh Ramdin. After that Amazon Warriors lost the wickets of Ramdin, Jimmy Neesham and Christopher Barnwell in the space of 17 balls for the addition of just 18 runs. But a 10 ball 30 of Mohammad Hafeez took them to a competitive 173 for five in their allotted 20 overs.

Chasing 174 to win Barbadose lost their opener Shane Dowrich early. But other opener Dwayne Smith was in no mood to slow down. He along with Shoaib Malik took the Tridents to a comfortable position. When Malik was run out the score was 152 for two after 16.4 overs, needing just 22 runs in 20 balls for the home side. It looked easy task for them. But suddenly in the next over they lost Pollard and Mendis. Though Smith brought up his second century of this year’s CPL in 62 ball and remain not out but that was not enough for the home side.  Barbadose finally finished their innings on 166 for four. For his hundred Dwayne Smith got the Man of the match award. 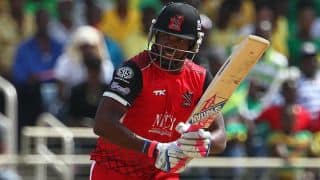