St Lucia Stars, playing their final match of the Caribbean Premier League, bowed out of the tournament with a six-wicket win over Barbados Tridents.

St Lucia Stars, playing their final match of the Caribbean Premier League, bowed out of the tournament with a six-wicket win over Barbados Tridents, ensuring that the Jason Holder-led side remained winless at home ground of Bridgetown.

Tridents, who were missing the services of Steve Smith, ruled out due to an abdominal strain, were dented by his absence in their quest to put up a challenging total and could only muster 135/7 in which Hashim Amla top-scored with 35. The opening pair of Martin Guptill and Dwayne Smith once again failed to get the team off to a good start and were removed n consecutive overs. Amla started in good nick, scoring three boundaries in a row to settle some nerves, but was done in by a poor judgement of run and was found short of his crease.

Kesrick Williams, Rahkeem Cornwall and Obed McCoy bowled splendidly to stifle Tridents scoring rate in the middle overs, and the launch they were expecting never arrived. Nicholas Pooran and Ashley Nurse scored 14 each and Shamar Springer chipped in with 17, ensuring that a total that didn t seem like touching 100 ended up being a lot more. Christopher Lamont, Williams and McCoy shared six wickets between them.

The chase was never going to be much of a sweat for the Stars but Mohammad Irfan removing openers Andre Fletcher and Rahkeem Cornwall in two overs gave them some hope, before they were dashed by a 56-run partnership between David Warner and Chandrapaul Hemraj. Neither batsman did anything extravagant, rather they stuck to matching the asking rate of seven per over. Warner s knock in fact came at less than a run-a-ball but it never mattered as the Australia held his end and looked in control of things.

In Hemraj, Warner discovered an able and reliable partner, who got his eye in and later cut loose. In the seventh over, he took Nurse for 20, including two fours and two sixes. However, one shot too many and Hemraj perished to Holder, only his third wicket of the season. Captain Kieron Pollard s dismissal next ball was like a spring in the tail for the Tridents. At 80/4, they had stepped one leg inside the door, but it was forced shut with Warner getting together with Lendl Simmons (24* off 17) for an unbeaten 56-run stand that guided them home.

In order to stay in the race for the Playoffs, Tridents fate rested on the St. Kitts and Nevis Patriots game. But an unexpected win over Jamaica Tallawahs secured the Patriots a passage to the final four. 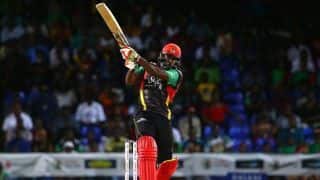