Shakib, the Bangladesh captain, will be replacing legspinner Sandeep Lamichhane who leaves for national duty.

Bangladesh allrounder Shakib Al Hasan has signed with CPL franchise Barbados Tridents for the remainder of the tournament and is likely to play the team’s next match against St Kitts and Nevis Patriots on Saturday. Shakib, the Bangladesh captain, will be replacing legspinner Sandeep Lamichhane who leaves for national duty.

This will be Shakib’s fourth season in the Caribbean Premier League having earlier played in 2013, 2016 and 2017 across which he’s scored 243 runs and picked up 25 wickets for Tridents and the Jamaica Tallawahs. Shakib’s 6/6 against Trinbago Knight Riders in the inaugural edition in 2013 is still the best bowling figures in the history of the tournament.

Tridents, currently placed fourth on the points-table will be boosted by Shakib coming on board. The Bangladesh captain had a stellar World Cup scoring 606 runs at an impressive average of 85. 57 and maintained it in the T20I tri-series with 96 runs from four games.

Shakib’s signing comes only three days after England fast bowler Harry Gurney joined the franchise. Gurney, 32, played the last of his 12 international matches for England in December 2014 but has been all around the globe playing T20 franchise cricket. Last year he turned up for the Melbourne Renegades and scalped 10 wickets from nine matches.

Earlier this year, Gurney played his maiden season of the IPL and tallied seven wickets from eight matches for two-time champions Kolkata Knight Riders, including figures of 2/25 on debut against Rajasthan Royals. On Monday, he played against the Jamaica Tallawahs and returned figures of 1/20. 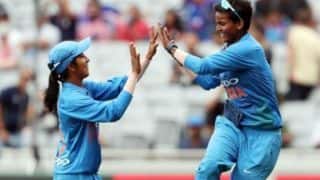