It was Craig Ervine s unbeaten 69 off 55 that kept the visitors in hunt for an overseas win, as the five-match series is now tied 2-2.

Despite a world-record opening stand, hosts Sri Lanka lost the fourth One-Day International (ODI) to Zimbabwe at Hambantota on Saturday. It was Craig Ervine s unbeaten 69 off 55 that kept the visitors in hunt for an overseas win, as the five-match series is now tied 2-2. Winning the toss, Sri Lanka elected to bat first. Openers Niroshan Dickwella and Danushka Gunathilaka replicated their effort in the third ODI, putting up the first consecutive 200-plus partnership in the history of ODI cricket. However, the team eventually lost a few wickets in quick succession to settle for 300 for 6 at the end of their 50 overs. In a rain-affected match, Zimbabwe chased the revised target of 219 in 29.2 overs, with 4 wickets and 10 balls still in hand. Full cricket scorecard, Sri Lanka vs Zimbabwe, 4th ODI

Dickwella and Gunathilaka provided Sri Lanka with a perfect start, putting up over 200 runs in 35 overs. Dickwella scored the second century of his career, becoming the eighth Sri Lanka batsman to have scored consecutive ODI centuries. Gunathilaka, however, failed to replicate the same, throwing his wicket to Malcolm Waller for 87. Waller gave his side the first breakthrough. His partner Dickwella departed soon after, scoring a commendable 116. Skipper Angelo Mathews and Upul Tharanga accelerated the scoring rate post that; Tharanga hit the first six of the day and Mathews soon took the cue from him, following up with another.

But Tharanga could not continue for long, getting bowled by a Sikandar Raza delivery for 22. Sri Lanka lost 3 wickets in 8 deliveries at this point, with Asela Gunaratne departing for 1 and Kusal Mendis following him for a golden duck. Mathews went on to score 42 till he was dismissed off the last delivery of the innings.

Zimbabwe gave away too many runs and lives to the hosts batsmen. There were multiple dropped catches and misfieldings while the Sri Lankan batsmen were equally efficient in running between the wickets.

Though both Malcolm Waller and Chris Mpofu picked up 2 wickets each, the former was the one to peer through the Sri Lankan defense, which restricted the hosts to 300.

Chasing the target, Hamilton Masakadza looked in a brilliant touch, as he displayed some elegant shots. However, his stint was cut short by Sri Lanka s new find Wanidu Hasaranga. Though losing Masakadza for 28 in a 301-run chase was not a good start, Zimbabwe revived, courtesy Solomon Mire and Tarisai Musakanda s knocks. Mire added 43 off 30 while Musakanda s pacey 23-ball 30 was a handy contribution. However, it was Ervine s knock post the interruption due to rain that made all the difference. While wickets kept falling at the other end, Ervine kept dealing in boundaries, hitting as many as 8 of them, to take his side to victory.

Hasaranga was the most successful of the Sri Lanka bowlers, picking up a 3-for. But his efforts went in vain as Zimbabwe won the match comfortably. 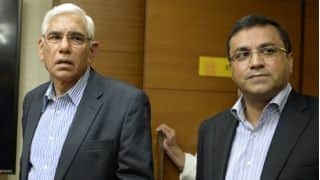 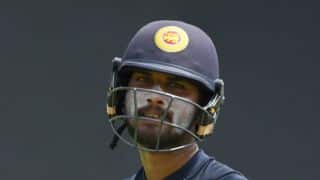