Somerset wicketkeeper-batsman Craig Kieswetter has confirmed that he will undergo an eye operation after a horrific facial injury during a county game against Northamptonshire, but clarified that his eye is safe.

Kieswetter, who has represented England in 46 One-Day Internationals (ODI), sustained a fractured cheekbone and broken nose after a David Willey bouncer sneaked inside the helmet grill while batting on the opening day of Somerset’s LV County Championship clash at Wantage Road on Saturday.

Kieswetter, 26, posted a picture on his Twitter account of the damage caused, with his right eye swollen shut and a dark purple patch surrounding the area.

“Injury update: broken nose and a fractured orbital socket. Surgery is required but thankfully no lasting damage to the eye,” he tweeted.

It is not known how long Kieswetter will be absent for, with replacement wicketkeeper Alex Barrow taking his place behind the stumps in the current fixture. 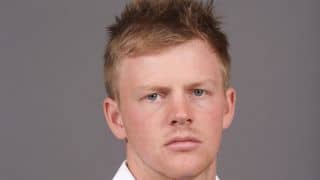