Less than a month before its AGM, the CAB has become a divided house.

Kolkata: Less than a month before its AGM, the Cricket Association of Bengal (CAB) has become a divided house after the balance sheet revealed a deficit of Rs 3.70 crore, a first in 10 years. Senior finance sub-committee member Hironmoy Chatterjee, who incidentally, is also an All India Tennis Association official and BTA secretary, claimed that CAB has spent lavishly on the 121 affiliated unit members that including gifting them tablets and the transport costs ran to the tune of Rs 4 crore.

“I have raised this issue because I feel it is relevant, and I’m aware that this is going to hurt a lot of people’s interest but I don’t care,” Chatterjee told PTI. “There has been some non-cricket related expenses that could have been avoided. All CAB members use transport which is not fair. About Rs 3 crore have been spent on transport.”

“We have season for about three-four months a year and a some international matches. CAB could have avoided such splurging on transport.” He further pointed out that all CAB affiliated members were given tablets and gifts in the last AGM.

“Is this for development of cricket?” Chatterjee fumed. He further claimed the CAB has spent Rs 4 crore on stadium maintenance and Rs 2 crore on refreshments in various programmes. “No doubt, the BCCI grant has been less this time as it’s proportionate to their income which has led to the deficit.

But the loss could have been less if they did not spend so lavishly,” Chatterjee added, pointing out the CAB’s spending on parties and the 150 years’ celebration. Incidentally in the last financial year there was a surplus of Rs 14 crore.

As a matter of fact, the CAB had made headlines when to make Sachin Tendulkar‘s 199th and penultimate Test memorable they had booked a private aircraft to shower 199kg rose petals, which eventually was cancelled as the match finished early. The CAB also had invited many high profile guests during their three-day celebrations of 150 years.

Rubbishing Chatterjee’s claims, CAB joint secretary Subir Ganguly said: “These are all baseless, the spending on transport and stadium maintenance is much lesser than what he has alleged. In fact, Chatterjee never shows up here, so he has little knowledge.”

On distributing tablets as gifts, the joint-secretary asked: “Even he has got one then why has he not returned?” Blaming the loss to the reduced BCCI grant, CAB treasurer Biswarup Dey said: “There has been a fall in the share of revenue that we get from the Board. The amount stands at around Rs 15 crore. That’s the main reason why we suffered the deficit.”

The CAB also incurred a loss of about Rs 50 lakh after an India-West Indies match last year got cancelled in the last minute due to the Caribbean team’s pullout. The AGM is slated later this month and the issue is likely to be a raging issue. 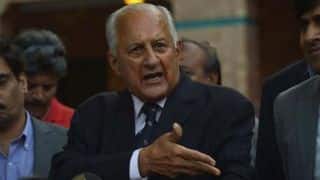