An apex court bench described as "unfair" that the matter was being brought before it again.

A last ditch effort to stall N Srinivasan from becoming the chairman of the International Cricket Council (ICC) was frustrated as the Supreme Court on Monday declined to hold an early hearing of a plea by the Cricket Association of Bihar.

An apex court bench of Justice Vikramajit Sen and Justice Shiva Kirti Singh described as “unfair” that the matter was being brought before it after the same was declined by an earlier bench.

The court said this after the counsel opposing the Cricket Association of Bihar plea told the told court that the bench headed by Justice JS Khehar had declined the plea last Thursday.

“It is unfair if it was mentioned earlier,” the court told senior counsel Nalini Chidambaram. She had urged the court to hold an early hearing for the CAB plea. 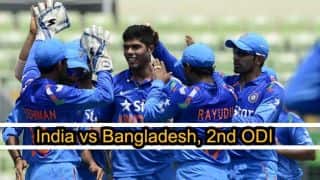