Cricket Australia 2016-17 Under 19 National Championships: Round 5

Cricket Australia 2016-17 Under 19 National Championships: Round 5

Victoria Metro s Will Pucovski has continued his incredible form at 2016-17 Under 19 National Championships in Adelaide, producing a fourth consecutive century in Round 5.

Victoria Metro s Will Pucovski has continued his incredible form at 2016-17 Under 19 National Championships in Adelaide, producing a fourth consecutive century in Round 5 on Sunday. Pucovski made an unbeaten 120 as VIC Metro recorded their fourth victory, with the skipper leading his side s run chase against the Northern Territory. The NT bowlers toiled hard but a fourth consecutive hundred for Pucovski was the difference. Hamish Martin (106) made a stylish century for NT as they posted 7-225, but unfortunately that wasn t enough for a breakthrough victory. NSW Metro held their nerve to beat VIC Country by 24 runs to go through the Pool stages unbeaten.

Param Uppal (97) and Ryan Hackney (35) set the tone with the bat for NSW Metro as they added a 95-run partnership for the first wicket. An unbeaten 54 from 33 balls from Thomas Sowden, which included three boundaries and four sixes, helped NSW Metro reach 4-268. In reply, Thomas Rogers 94 wasn t enough for VIC Country as they were dismissed for 244 in the 48th over. Devlin Malone was the best with the ball for NSW Metro, taking three wickets. ACT/NSW Country defeated WA in a last over thriller by four wickets.

Cricket Australia 2016-17 Under 19 National Championships: Round 4

Batting first, WA posted 6-264 thanks to half-centuries from Aaron Hardie (77) and Darius D Silva (56). Jason Ralston s three wickets helped stem late runs. In reply, half-centuries to Alec Baldwin (60) and Lewin Maladay (85*) were enough to secure victory with five balls remaining. Liam Knight picked up three wickets to be the standout with the ball for WA.

Cricket Australia 2016-17 Under 19 National Championships: Round 3

Leg-spinner Lloyd Pope was the hero with the ball for the Cricket Australia XI, taking 6-21 from 5.5 overs to dismiss his home state, South Australia, for just 87. Joshua Hoffman (28) was the only SA batsman to show any resistance, before Jack Edwards (43 from 34) ensured there would be no repeat in the second innings as the CA XI chased down the target in the 19th over with nine wickets in hand.

Tasmania beat Queensland in a thriller, chasing 231 with two balls remaining. Keegan Oates (95*) was the hero for Tasmania, while wicket-keeper James Odgers (52*) played a fantastic supporting role. Two wickets a piece to Mitchell Connolly and Harrison Macoun was not enough for Queensland to claim victory.

Earlier, Harrison Wood s classy 89 was the standout batting performance for Queensland. Liam Ward (3-53) and Pearce Watling (2-31) were the best with the ball for Tasmania. Eight teams are now through to the quarter final stage, which will be played tomorrow (Monday).

For full scores, fixtures and coverage, head to www.nationalchamps.com.au

Scores in brief Round 5

Fixtures Quarter Finals (all matches start at 10am on Monday) 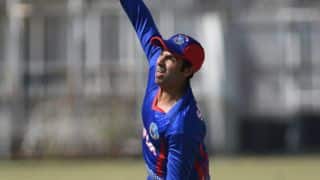 Mohammad Asif: No one knows the art of exploiting new ball better than me