Cricket Australia (CA) board director John Bannon has passed away aged 72. The administrator was stricken by cancer in 2007 and it never cured. He was appointed in his post with CA since 2008. He was also the former Premier of South Australia. Bannon was the longest serving Premier from the Labor party. He worked with several boards during his lifetime but was a prominent name in the Australia cricket administrator scene. He also worked with South Australia Cricket Association (SACA). In 2014, he was honoured with a life membership by SACA.

Bannon was instrumental in CA’s plans in trying to take cricket outside it’s traditional stronghold white community in Australia to indigenous Australians. In his statement, CA chairman highlighted that aspect of his work most prominently.

“As a board, we will miss John’s stature, his knowledge and his wisdom,” Peever was quoted as saying by espncricinfo.com. “He provided the Board with astute judgement and decades of experience navigating complex and challenging issues.

“Throughout that time he championed cricket’s efforts to better engage Indigenous communities as co-chair of the National Indigenous Cricket Advisory Council, a cause he was fiercely passionate about. He also played an important role overseeing the recent governance changes to Australian cricket.

“On a personal level I will miss his friendship, wisdom and guidance. He was always selfless in the way that he was prepared to share his knowledge to better other people and the game. Despite his tremendous experience and depth of knowledge he carried himself with great humility, never imposing his will on others. Our game and our country has lost a remarkable man.

“We extend our deepest sympathies to John’s wife Angela and the entire Bannon family at this sad time.” 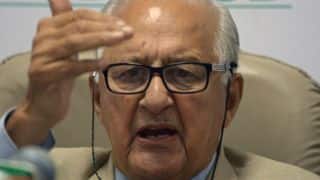 PCB has given up on India-Pakistan bilateral series, says Shahryar Khan