Fans can tweet to CA's official handle with the words '#TheUrnReturns" and get a personalised digigraph.

Australian fans now have the opportunity to get a personalised memorabilia on Twitter commemorating Australia‘s 5-0 Ashes whitewash. Cricket Australia (CA) announced that the fans can tweet to their official handle with the words ‘#TheUrnReturns” and they would get a photo of the Australian team posing with the urn and a personalised message from Michael Clarke on it.

.@MClarke23 has a personal message of thanks for all supporters. Have you got yours yet? Just tweet @CricketAus and #TheUrnReturns

This isn’t the first time a cricket board has come up with such a move. During Sachin Tendulkar’s last international series in November last year, fans could tweet to the Board of Control for Cricket in India’s (BCCI) Twitter handle and get a personalised message from the legendary batsman.

With Australia winning 5-0, the fanfare is humongous and this will certainly please millions of Australians. 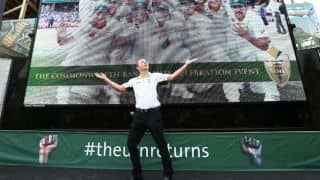