CA has paid tribute to the life and memory of Trooper Albert Tibby Cotter, the only Australian Test cricketer to be killed in the First World War.

Cricket Australia (CA) has paid tribute to the life and memory of Trooper Albert Tibby Cotter, the only Australian Test cricketer to be killed in the First World War. He died 100 years ago today, October 31, in the third Battle of Gaza that is known for the mounted charge at Beersheba. Cotter made his debut for New South Wales in 1901 at the age of 18 and his Test debut (Baggy Green No. 85) against England at the end of the 1903-04 series. In his second Test, at the MCG, he took 8 for 65 to guide Australia to victory. He joined the 1905 tour of England, taking 121 wickets at 20.19. His three Tests included 7-148 in the first innings at The Oval. The C s: Splendid batsmen, fiery pacers, one great spinner

Overall, Cotter played 21 Tests and his fast, slinging action captured 89 wickets at an average of 28.64. His first-class career encompassed 113 matches for 442 wickets at 24.27. Cotter enlisted in the Australian Imperial Force (AIF) in April 1915, aged 31. The Australian War Memorial says of his military career:

Despite having no great riding ability, he was accepted into the 1st Australian Light Horse Regiment; he took a late part in the Gallipoli campaign. Later he transferred to the 12th Light Horse and was commended for his fine work under heavy fire during the second battle of Gaza. The official history remarked: he behaved in action as a man without fear . He declined promotion. Ashes 1907-08: Australian tail clinches thriller at Sydney

On 31 October 1917 the 4th Light Horse Brigade, of which the 12th Regiment was part, captured Beersheba by a brilliant cavalry-style charge. Cotter was there as a stretcher-bearer. At the end of the charge, as troops dismounted to engage the enemy, a Turk shot Cotter dead at close range. The CEO of Cricket Australia, James Sutherland, said the 100th anniversary of Cotter s death was a reminder of the sacrifices that had been made by Australians involved in conflict.

Tibby may have been the only one to have worn a Baggy Green, but sadly he was among more than 60,000 who were killed in the First World War. Given that Australia had a population of less than five million at the time, that war remains our costliest in terms of deaths and casualties. Even as we look forward to another Ashes summer, it s incumbent on us at times like this anniversary to remember the dedication and courage of all those who have served Australia, and continue to do so today. 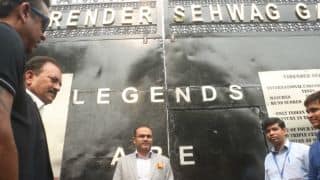