A photo, shared recently on social media, caught hold of a peaceful sight of an otherwise peace-starving state.

It isn’t an unknown fact that Jammu and Kashmir is a terror-struck region. The state often makes the front page for unfortunate reasons. However, a photo, shared recently on social media, caught hold of a peaceful sight of an otherwise peace-starving state.

A Cop and a downtown Srinagar boy. Looks like a game of Cricket helps them all destress themselves. pic.twitter.com/eLXQhaOgZC

The above picture signifies an exact opposite scenario of the state. As seen in the image, a police and a civilian are enjoying a good time indulging in (gully) cricket. One can clearly see that the policeman’s shield, used for protection protests, is used as stumps. Doesn’t it signify a clear message: cricket can restore peace even in a troublesome region.

World cricket has noticed Afghanistan’s significant rise from the ashes. Their fans, just like the picture shared from Srinagar, take pride in the team’s victories, and tend to forget all worries due to terrorism courtesy the sport.

We wish cricket continues to impart a similar effect on one of the glorious parts of our country as well.

During my brief interaction with an army officer, he revealed that serving in Jammu & Kashmir is the toughest. They have to fight with their own people for peace and harmony. Under such circumstances, if cricket can bind them together, and ensure safety, the game will continue to ’emerge victorious.’

I wish to hear a positive feedback from the officer fulfilling his duties in the conflict-ridden region. 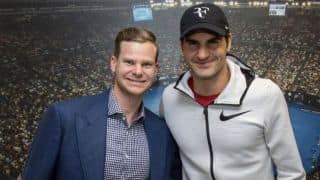