With military precision, a flotilla of eccentric Englishmen took to the waves Wednesday to contest one of the world s craziest sporting fixtures: a cricket match played in the sea. 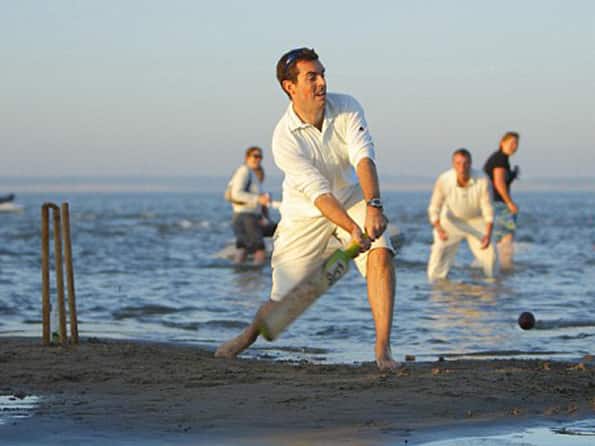 Every September, the Royal Southern Yacht Club from Hamble on the mainland takes on The Island Sailing Club from Cowes, meeting half way on a few square metres of soggy sand

With military precision, a flotilla of eccentric Englishmen took to the waves Wednesday to contest one of the world s craziest sporting fixtures: a cricket match played in the sea.

To the certain bemusement of passengers on ocean liners sailing past, cricketers dressed in traditional whites jumped out of their boats and did what madcap Brits do in the middle of busy shipping lanes — play cricket.

The annual match takes place on Bramble Bank, a tiny patch of sand that emerges for 30 minutes at the year s lowest tide in The Solent, the strait separating the south coast of mainland England from the Isle of Wight.

Every September, the Royal Southern Yacht Club from Hamble on the mainland takes on The Island Sailing Club from Cowes, meeting half way on a few square metres of soggy sand.

With dry land — and anyone with any common sense — several nautical miles away in either direction, yachts drop anchor at the still-invisible pitch an hour before the Moon and Sun combine to reveal the Brambles.

“We wait for the covers to be removed,” said umpire Philip Gage, eagerly watching the sonar depth reading on board his yacht.

The vanguard jumps overboard to test the water, plunging in waist deep.

When it finally reaches the ankles, dozens leap out from their rib boats, scramble towards the largest dry patch, and quickly set up the stumps.

The wicket is damp to say the least, with puddles and channels between the two ends.

With barely 30 minutes to play around with and seven overs per side to cram in, the teams get straight down to action.

The action is comical, with fielders diving into the water for catches and easy run-outs as batsmen stumble over in the puddles.

Some impressive sixes have brave fielders wading out towards Southampton to retrieve the ball, while a young schoolboy standing in the square leg position was in up to his knees as he prepared to catch anything heading Portsmouth way.

A Labrador dog roamed around the pitch, as did a man on an old-fashioned penny-farthing bicycle.

In beautiful autumn evening sunshine, more than 100 spectators crammed around the exposed sand, standing within metres of the batsmen, and many got a good soaking as they dodged shots.

“This is extreme cricket,” said onlooker Tony Scarth, 54, an engineer from Warsash on the mainland.

“It s also pretty English. Where else do they play cricket in the sea?”

Batting at number four for the Royal Southern was Sir Robin Knox-Johnston.

The first man to circumnavigate the globe non-stop single-handed scored nought, but trudged back into the shallows insisting: “I maintained my average!”

Anything landing in the sea should score six, but in truth the scoreboard is farcical and each club takes it in turns to win and host the post-match supper.

At the change of innings, the players rushed down a gin and tonic, with Royal Southern having scored an improbable 284.

“The key to the bowling is to pitch it just at the edge of a puddle,” said Knox-Johnston.

“That way the batsman gets a face full of water and the ball might still reach him,” the 72-year-old told AFP.

One Island batsman was clean bowled, knocking over not only his off-stump but several drinks too.

Independence of the Seas, a giant 15-deck cruise ship heading to Spain, honked its horn as it passed the bizarre spectacle.

With the rising tide slowly flooding the wicket, umpire Gage called time, sparking a scramble to get back on the boats as within minutes, the entire pitch had vanished.

The annual match has been played for nearly 30 years, though cricket on the bank dates back to at least the 1960s.

“Everyone can go out on boats, mysteriously this bit of sand appears and everyone can go and play on it. That s the magic of it,” said former Royal Southern commodore Tom Richardson, who founded the contest.

“This year was a gentle match. In the past, an element of rugby has crept in.”

The trophy ceremony back at the Royal Southern clubhouse was held up as Island forgot to bring the shield with them and had to return to the Isle of Wight to fetch it.

“There are few days every year that one really looks forward to: your birthday, wedding anniversary if you can remember it, the day your wife agrees to have sex and the Brambles cricket match!” (AFP)