Going by the reports, Trump's party has won 276 seats, while Hillary won 218 seats.

November 9, 2016 mark this date as it will be remembered for a long period of time for a historic change in the United States of America (USA) as the nation selected Donald Trump as their next president. Trump will take the seat of President of USA after Barack Obama, who was in the office from January 2008 to November 2016. Trump becomes the 45th President of USA as he won the election by claiming 48% of votes. Since the beginning of this election campaign, Trump has been promoting himself quite aggressively and has always made headlines with his controversial comments.

Trump was the face of Republican Party and defeated Hillary Clinton, who represented the Democratic Party. Going by the reports, Trump’s party has won 276 seats, while Hillary won 218 seats. Many big personalities came ahead prior to the election during the campaign and suggested not to vote for Trump but seems like that has worked in favour of Trump himself. From a very young age, Trump has been making headlines and used to be among the most popular real estate businessmen in USA. His victory is also seen as the victory of right-wing people by some sections of media, thus labelling his win as not-so-good thing to happen for the world.

But those media reports notwithstanding, fact of the matter remains Trump has won. With him becoming the new President of USA, many active and former cricketers have reacted and expressed their views on the same. We present some of the tweets from social zone.

I’m blaming trump for the traffic

What a day, Dharmasena gets it right as does Trump #INDvENG

If you take Trump’s speech at face value (tough but try) what does it say about people that he felt he couldn’t win campaigning like that?

Is my big bet on Big Orange on the Melbourne Cup paying on Donald Trump becoming President?

Who cares about Trump, Rooty is different gravy, he could do any job he wanted!! #worldclass

Ronald Reagan was an actor who became POTUS. The big worry is that Trump is no actor. He is the real thing!

Congratulations to the new, incoming President of #USA Mr.Donald Trump.

America a divided society. Those who disliked Hillary a little more than those who feared Trump. #trumpwins

All things considered, Trump has stumped Hillary…and the world

Trump may have won but Rajkot will always have Ranji’s leg glance… pic.twitter.com/bd3bIZE8PK

So Donald Trump is the 45th US President! The results has made all opinion polls look silly.

BREAKING NEWS: Donald Trump is the new President of the United States of America. Official.

Now Trump’s heading for the White House I wonder if Andrew Neil is thinking of getting a combover. #bobbycharlton you

For me, the most admirable characteristic in any leader is humility. What do the people in USA admire about Trump? 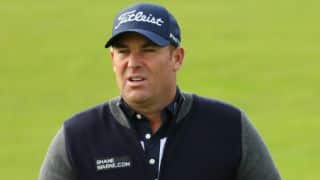