For the second consecutive year, the growth of female participation increased significantly.

Sydney: A record 1.2 million Australians participated in cricket in the 2014-15 season making it the country’s highest participation sport, according to The Australian Cricket Census, released on Tuesday.

The census, independently conducted by specialist researcher Street Ryan, which also undertakes research for other major participation sports including Rugby League and Australian Rules Football, confirmed participation in cricket increased by nine percent since the last research was conducted in June 2014.

Speaking on the development, Cricket Australia (CA) CEO James Sutherland said on Tuesday the results demonstrate that cricket is a sport of choice across Australia and its approach to attracting, developing and keeping people in the game is continuing to improve.

“We are very pleased with the nine percent overall increase, to a total of 1.2 million Australians who are now playing cricket,” Sutherland said in a release.

“Numbers indicate growth in traditional club cricket participation numbers. This is particularly pleasing given it has been an area of focus and is regarded as a strong indicator of successful entry level programmes producing sustainable participation,” he said.

For the second consecutive year, the growth of female participation increased significantly, growing by 18 percent year on year to reach 290,566 participants. Nearly one in four of cricket’s participants were found to be female.

“With an aspiration to be Australia’s favourite sport, and a sport for all Australians, it is pleasing to see the continued increase in diversity across our sport. Female participants are now nearly a quarter of our playing base and whilst this growth is something that we are particularly proud of, diversity will continue to be an area of strong focus, including the desire to see significant increases in indigenous and multicultural participant numbers,” Sutherland added.

Participation in club and community cricket was also on the upswing. Presently, there are close to 25,000 cricket teams across Australia which account for 415,104 participants – a six percent increase on 2013-14.

Traditional 11-a-side club cricket accounted for 344,053 participants across 23,000 teams, including 90 new female 11-a-side teams. It is the third consecutive year that traditional club cricket participation has increased. Shane Warne insists Michael Clarke should bat at no. 5 to keep series alive

Cricket was also the prime sport in school in 2014-15. A total of 628,826 participants played cricket in schools, a 15 percent increase on last year.

The census coincided with National PlayCricket Registration Drive, Australian Cricket’s national participation campaign that calls on its countrymen to sign up to play the sport. Ian Bell expects Australia to come back hard 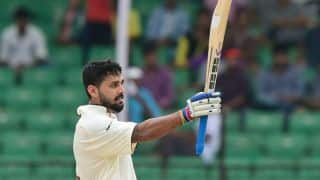