The former captain said India, to their advantage, will get a lot of time to prepare there for the five-match Test series.

Batting legend and one of the most respected gentlemen in world cricket – Rahul Dravid reckons India will prevail over England 3-2 in this summer’s away Test series. Dravid also believes this could be the “best chance” for Virat Kohli and Co. to win in the UK since 2007. The five-match series, scheduled for August-September, will be a ‘tough’ contest overall and a ‘great series to watch’, Dravid said.

Dravid was the last Indian captain to win a Test series in England. “I really do think India have a very good chance this time,” Dravid said during a webinar, according to ‘ESPNcricinfo’. The webinar was organised by Live Aid India, a trust to help those affected by COVID-19.

Dravid, who is now the head of the National Cricket Academy – NCA – in Bengaluru, said Ravichandran Ashwin versus Ben Stokes could form an “interesting subplot” to what is expected to be an intriguing series.

“There’s no question about England’s bowling. Whatever bowling attack England put on the park, especially their seam-bowling attack, is going to be fantastic. They have a lot of players to pick and choose from and that’s going to be terrific.

“But if you look at their top six or top seven, you really think of one great batsman, a world-class batsman who is Joe Root.

But an Indian cricket team, on the back of its historic triumph in Australia and the home series win against England, will certainly fancy its chances. “… But I just think India will be well-prepared, have the confidence from Australia, there’s lot of belief in the squad.

“A couple of players have been to England a few times, there’s a lot of experience in the batting order this time around, so this is probably our best chance, maybe say 3-2 to India,” Dravid said.

The former captain said India, to their advantage, will get a lot of time to prepare there for the rubber. “I think India will play really well in England this time,” Dravid said.

“It’s a great opportunity we’ve got. After the WTC final, they’re going to be in England for a whole month before the Test series starts. I don’t think any team has had that kind of time to prepare for a Test series as India will have this time, so that surely should be a great advantage.

“In England, if there’s one thing you’ve always got to respect, it’s the conditions. It’s slightly different from say an Australia or India.

“To some extent you sort of get the feeling (as batsmen) that you’re never set. Even if you’re set and you get a good start, batting on 30, 40, 50, things can change very quickly, the weather can change, the ball can swing even after it’s 40-50 overs old,” Dravid observed.

With no Kohli-Rohit in Ranks, India Will Tour Sri Lanka in July For Limited-Overs Series: Ganguly 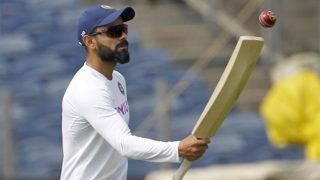