A recent research in the subject revealed that such combinations offered no advantage.

Cricket blogger Kartikeya Date, who writes for ESPNcricinfo, conducted a detailed study about the merits or demerits of sending in a left-handed batsman with a right-handed batsman or vice versa, or right-right or left-left pairs in One-Day International (ODI) cricket.

Date studied every one-day game featuring Test-playing nations since 1979, focusing on the top seven batting positions only and found individually there hasn’t been any significant difference in the performance of left-handed and right-handed batsmen, News.com.au reported.

Lefties reportedly had the upper hand during the late 1990s when batsmen like Brian Lara, Sourav Ganguly, Michael Bevan and Sanath Jayasuriya were at the top of their game, but right-handers have been better in recent years as players like AB de Villiers, Virat Kohli and Steven Smith rule world cricket.

Overall there’s been very little difference in the performance of left-right, right-right and left-left pairs and since 2000, the average partnerships for each were 36.3 runs (left-right), 35.3 runs (right-right) and 34.4 runs (left-left).

According to statistics, Australia‘s bowlers actually performed much better against left-right pairs, holding them to an average of 30.1 runs per partnership, compared to 34.5 for left-left pairs and 39.3 for right-right pairs.

Despite these results, Date found left-right batting pairs have become increasingly common. In 1989, more than 75 per cent of batting pairs featured two right-handed batsmen, which dropped to around 40 percent last year, as left-right pairs increased to more than 50 percent.

Further, he stated that it shows that bowlers should be used to bowling against left-right pairs since such pairs are as common as right-hand pairs in contemporary international cricket. 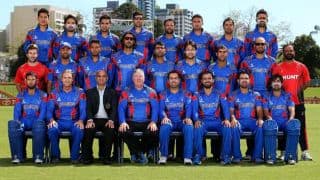