Hazlewood was "bitterly disappointing" after missing out of the 15-man squad.

In the recent batsmen-dominated ODI series, hosts England and Pakistan put on board close to 350 runs in almost every match.

Langer said the bowlers need to take the responsibility of stopping teams from posting huge totals.

“There’s a lot of talk about batting now in white-ball cricket, but our bowling is absolutely critical. In T20s, it’s absolutely critical and the same in ODI cricket. You’re going to have a pretty thick skin to do well in international cricket, particularly on the flatter wickets and the fast outfields and the big squares we play on in England, said Langer.

“They’re going to have to have thick skin but they’re physically tough and mentally tough and they’ll be ready for it,” he was quoted as saying by Australian media.

Hazlewood was “bitterly disappointing” after missing out of the 15-man squad. It was Kane Richardson, who was roped in by the selectors following the shoulder injury that forced Jhye Richardson out of the squad. “He just hasn’t been playing any cricket,” Langer said.

“He’s come off a second stress fracture in his back and while he’s just starting to get up and running in the nets now I think he’s played six white-ball games in the last 18 months that s T20 and one-day cricket. We know he’s a great bowler. He’s a brilliant bowler, but it was just such bad timing for him.”

Hazlewood had expressed his frustration following the omission and Langer said he had no problem with him voicing his disappointment, last week.

ALSO READ: ‘Australia have a problem of plenty particularly in the top four’

“He’s a terrific bloke, he’s been vice-captain of the team. He’s a brilliant bowler… his numbers over the last four years have been good. But over the last 18 months, he just hasn’t played enough (one-day) cricket,” he said.

“I’m sure he’s disappointed. There are a few guys who are disappointed not to be in the squad. Hopefully, through the Australia A series, he can start playing cricket again and then when he does that, we can’t wait to welcome him back.”

The five-time champions will play three warm-up matches, starting with an unofficial fixture with the West Indies on Wednesday.

Australia will take on hosts England ahead of a final practice match against Sri Lanka next Monday.

The defending champions will begin their World Cup campaign against a tricky opponent in Afghanistan and Langer said the next few practice matches will be crucial ahead of the opening match.

“My biggest worry for the World Cup is we need to get match hardened again,” he said.

“By the end of the summer, we played very well against Pakistan. The boys were a bit weary, but they were up and running. So, we’re going to try to get out in the middle as much as possible.

“We’ve got three practice games in the next 12 days I think, every chance we get to get on a centre wicket is very important for us,” he added.

Meanwhile, captain Aaron Finch has admitted that the mere presence of Ricky Ponting in the dressing room and on the training track immediately lifts the morale of every member of the group as they look to defend their World Champions title in the upcoming World Cup beginning May 30 in England.

Ponting will be there as a specialist coach with the Australian team for the showpiece event. “The boys all want to impress ‘Punter’,” cricket.com.au quoted Finch as saying

“Everyone wants to impress Punter, you should see them – it’s like eight-year-old girls around Justin Bieber when Punter’s around the changeroom. It’s embarrassing, but it’s great.” 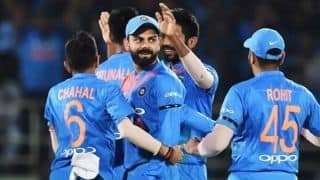