Buttler's uncanny ability to innovate and score runs in all areas makes him a dangerous opponent.

Jos Buttler‘s ability to single-handedly change the course of matches is a key reason why tournament hosts England head into the ICC Cricket World Cup as favourites to win it for the first time.

The 28-year-old has hit five of the fastest 10 one-day international hundreds ever scored by an England batsman.

In a format in which fielding restrictions apply, Buttler’s uncanny ability to innovate and score runs in all areas makes him an especially dangerous opponent.

England fast bowler Jofra Archer found himself up against some of the world’s best batsmen during the recent Indian Premier League but he still reckoned his most difficult challenge was bowling to Rajasthan Royals team-mate Buttler in training.

“The best player I faced was Jos Buttler in the nets,” said Archer. “He is a 360 (degree) cricketer. He can hit you straight down the ground or over the ‘keeper’s head. I don’t think anywhere is safe with him.”

It was a point emphasised by Pakistan coach Mickey Arthur following Buttler’s blistering 110 not out off 55 balls, including six fours and nine sixes, during England’s win in an ODI in Southampton earlier this month.

“I don’t know how you bowl to him,” said Arthur, a vastly experienced coach who has previously been in charge of both Australia and his native South Africa. “I’ve just asked the bowlers the same thing and they didn’t have an answer either.”

(READ: England team profile – all you need to know)

England’s 2015 World Cup campaign when, then as now, Eoin Morgan and Buttler were captain and vice-captain, ended in a pitiful first-round exit. But since then they have climbed to the top of the ODI rankings, mainly as a result of putting their trust in a fearless brand of cricket for which Buttler is the standard-bearer.

“The biggest learning from that World Cup was sort of how far we were behind the best teams in the world at the time,” he told reporters at England’s tournament kit launch on Tuesday.

“We had to change quickly and adapt to the way cricket was being played and start afresh,” added Buttler, also England’s ODI wicketkeeper.

That change in attitude was evident in England’s first ODI after the 2015 World Cup.

(READ: England seem obsessed with getting to 500 before anyone else: Kohli)

They beat New Zealand, that year’s losing finalists, by a mammoth 210 runs at Edgbaston after posting a total of 408 for nine featuring Buttler’s whirlwind 129 off 77 balls.

“That series we played against New Zealand straight after the World Cup was brilliant for us,” recalled Buttler. “That first match we were 200-odd for six at one point but we still had the guys to take it on. We were at rock bottom and that meant we could play without many limitations.”

And yet it is an innings of 110 not out off 122 balls — Buttler’s slowest ODI hundred — which saw England to a tense one-wicket win over world champions Australia at Old Trafford last year that he rates as one of his best.

“I think being not out at the end is a great feeling,” he said. “Walking off knowing you hit the winning runs, even if it’s just 10 or 15, it’s great to be there at the end, especially batting in the middle and trying to see the team over the line.” 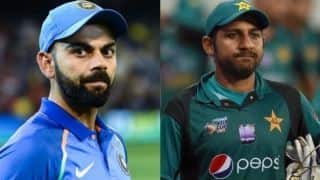 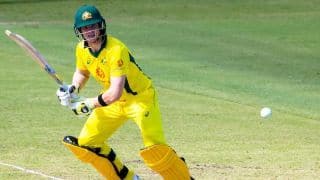