Australia, who were once cruising at 173/1, lost next 6 wickets for 112 runs and failed to put up a big total.

Aaron Finch scored a hundred while David Warner scored a fifty but Australia squandered a solid opening stand and were restricted to 285/7 against England in the 32nd match of the ICC Cricket World Cup 2019 at the Lord s Cricket Ground in London on Tuesday.

Finch and Warner continued their fine run of form and put up another hundred-plus run partnership (123 runs) before Moeen Ali dismissed the latter for 53. Warner was jeered on his way back into the pavilion.

While Finch and Khawaja put up a 50-run stand, Ben Stokes got the left-hander to begin the Australian side. The defending champions, who were looking set for a big total, were reduced to 259/7 from 173/1, losing six wickets for 86 runs.

Finch earned a reprieved when James Vince at backward point could not hold a tough chance. The Australia skipper completed a 61-ball fifty and then looked to up the tempo with a legside six off Moeen Ali.

Finch went to his century thanks to a misfield by Woakes but next ball he miscued a hook off Archer and Woakes made no mistake with the catch at fine leg.

New batsman Glenn Maxwell hit a straight six and four off successive deliveries from Archer only to fall for 12 when caught behind trying to ‘ramp’ Mark Wood, leaving Australia 213-4 in the 39th over.

England, bidding to win the World Cup for the first time, were unchanged from the side that suffered a surprise 20-run loss to Sri Lanka.

Australia made two changes from the team that Bangladesh by 48 runs in Nottingham, with off-spinner Nathan Lyon replacing leg-spinner Adam Zampa and Jason Behrendorff coming in for fellow paceman Nathan Coulter-Nile. 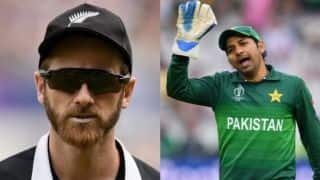 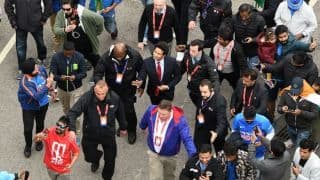