Afghanistan captain Gulbadin Naib won the toss and opted to bat first on a sunny morning against Pakistan.

Afghanistan captain Gulbadin Naib won the toss and opted to bat first on a sunny morning against Pakistan in Match 36 of ICC Cricket World Cup 2019 at Headingly, Leeds on Saturday.

Afghanistan, out of semi-finals contention, are still chasing their first win of the tournament having lost all their seven matches so far. Pakistan, on the other hand, have resurrected their campaign after a poor start but must win their remaining two matches to keep the semis hopes alive.

Pakistan have gone unchanged for this match but Afghanistan, hoping to dent their opponent’s semi-finals hopes, have brought in Hamid Hasan in place of Dawlat Zadran.

Afghanistan are taking confidence from their warm-up win over Pakistan who are coming after beating a strong New Zealand side in their previous match. ” It’s a sunny day, warm weather. Pakistan are a good side but we beat them in the warm-up game. We’ll try to give our 100% today,” Naib said at the toss. 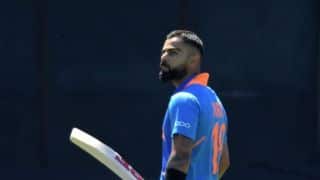