India have won three of the four games and are now sitting third on the points table with seven points from four matches.

After a brilliant performance against Pakistan at Old Trafford on Sunday, the Indian players have been given a two-day break to switch off, relax and come back stronger before their next game against Afghanistan in Southampton on Saturday.

The team management in an official statement said: “Indian team will now have a two-day break.”

Having started off late in the tournament, playing their first match after the completion of seven World Cup matches, India played three games in 12 days with the game against New Zealand being washed off without a ball being bowled.

They have won three of the four games and are now sitting third on the points table with seven points from four matches.

While Virat Kohli and boys played their first game against South Africa on June 5, their second game was against Australia on June 9.

The third game against NZ was washed off on June 13 and the fourth game was played against arch-rivals Pakistan on Sunday.

It was an amazing display of professionalism from the Men in Blue against Pakistan in Manchester. They first scored 336/5 in their 50 overs with vice-captain Rohit Sharma hitting a brilliant 113-ball 140 and the bowlers then tightened the screws on the Pakistan batsmen as the Indians won the game by 89 runs (D/L method).

Speaking after the game, Kohli praised both Rohit and chinaman bowler Kuldeep Yadav for their display. “Rohit’s knock was outstanding today. He again showed today why he is such a good ODI player. Kuldeep was brilliant. Those guys were only trying to play him out. A longer spell helped in that situation and he was getting into rhythm. They were thinking that he would go out of the attack sooner rather than later.

“That ball to dismiss Babar (Azam) was just outstanding with the drift, the turn and just beating the batsman batting so well. This is the best he has been bowling since coming to England and, him confident with Chahal, is going to be an important factor for us in the tournament,” he said.

But Bhuvneshwar Kumar might have to miss the next few games as per Kohli. “Bhuvi’s case looks like a niggle, a case of slipping on the footmarks. It doesn’t look too serious at the moment and looks like he could recover in a couple of games from now, maximum of three games,” he said.

“He is going to be an important factor for us so hopefully he can recover in time. But we have Shami with us and it shouldn’t be much of a worry for us. Even Bhuvi doesn’t think his niggle is too bad and that time would heal it.” 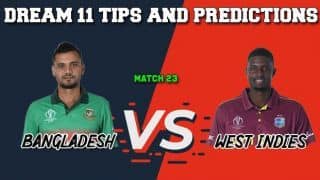