The International Cricket Council had told BCCI that Army insignia on gloves are prohibited and Dhoni can’t use such gloves in the World Cup 2019.

While the Indian cricketers have thrown their weight behind MS Dhoni in the matter of Army insignia on gloves, it is now reported that the Army has distanced itself from the issue.

Former Indian skipper had an Army insignia on his gloves during team’s first game in the ICC Cricket World Cup 2019 against South Africa.

The International Cricket Council had told BCCI that such logos are prohibited and Dhoni can’t use such gloves in the World Cup 2019.

“The regulations for ICC events do not permit any individual message or logo to be displayed on any items of clothing or equipment. In addition to this, the logo also breaches the regulations in relation to what is permitted on wicketkeeper gloves,” added ICC.

Dhoni had the Special Forces insignia on his gloves. However, the Army sources have now said that they are not sure whether the logo on Dhoni’s gloves was that of ‘Balidan’ medal of the Para Special Forces. (ALSO READ: Fans hit out at ICC for objecting to MS Dhoni wearing gloves with Special Forces’ insignia)

“Balidan medal has a maroon background and has metal on top. It is supposed to be placed on the chest. Without the maroon background, the insignia is not complete,” Army sources were quoted as saying by The Week. 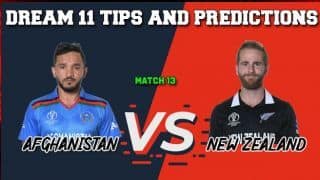