According to Ponting, Aaron Finch's resurgence is testament to Australia's durability and resilience.

Under Aaron Finch, Australia turned around a poor run of ODI form in 2018 to beat India in India 3-2 in an ODI series in February and then swept Pakistan 5-0 in the UAE in April.

Ponting, who will work with the team during the World Cup, underlined Australia’s recent success as well as their history at World Cups as signs that the defending champions are a serious threat.

(READ: Ricky Ponting puts focus on Australia’s abilities with and against spin)

“You’ve got to find a way to build your way into the tournament and make sure you’re playing your best cricket at the back alley. That’s one thing Australian teams have always done. They’ve tended to play their best cricket in the World Cups and when it has mattered in the big games,” he told The Telegraph.

“Australia’s got a very proud history. I know that’ll be something that will be spoken about within the group. But it’s also a chance for this current group of players to make a name for themselves on the world stage and a chance for them all to become World Cup winners as well.”

Finch last month shrugged off a lean run for form during which he went 21 innings without a half-century in limited-overs cricket, scoring two hundreds and two 90s in the 5-0 ODI series win over Pakistan.

According to Ponting, the skipper’s batting resurgence was further testament to Australia’s durability and resilience.

“The fact that Aaron Finch has just had a bit of success lately as captain and had got himself back into the runs after a pretty lean 12 months with the bat, that’ll give him a lot of confidence going into this World Cup,” he said. “To beat India in India for him as a captain is a big feather in his cap.”

(READ: Australia team profile – all you need to know)

“They’ve got a really good chance – I’ve been saying that for 12 months. It looks like a lot of the work that Justin and the senior players have done around the group is starting to pay off.”

Ponting won three successive World Cups in 1999, 2003 and 2007 – the latter two as captain of Australia – and he hoped to pass on his knowledge to the current squad.

“I guess that’s probably one of the reasons they’ve got me involved – having been around some successful World Cup campaigns,” he said. “Tournament play is a different thing, it’s not just another five-game series or three-game series. This is all about a pretty long tournament of one-day cricket.” 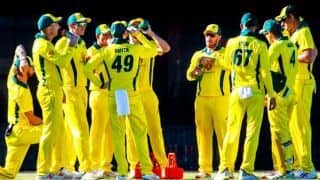 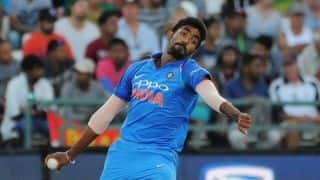