Star all-rounder Shakib Al Hasan believes Bangladesh have the wherewithal to create an upset against India but they will need to produce their absolute best to outwit the title favourites and keep their World Cup semifinal hopes alive.

Shakib produced a brilliant allround display, scoring a fifty and returning with a five-wicket haul as Bangladesh beat Afghanistan by 62 runs here on Monday to grab the fifth spot in the points table.

Bangladesh will need to beat India (July 2) and Pakistan (July 5) in their final two group matches to salvage any hopes of a knockout stage. ALSO SEE: Latest points table updated after Afghanistan-Bangladesh game

“India are the top side, someone who is looking at the title, it is not going to be easy but we will give it our best shot,” Shakib told reporters.

“Experience will help, we have to play our best cricket to be able to beat India. They have got world-class players who can take the match in their own hands. We have to be at our best but I believe we are a capable enough team.” ALSO READ: Had to work really hard with the bat, five wickets gave me greater pleasure: Shakib Al Hasan

Bangladesh’s spin bowling coach Sunil Joshi also exuded confidence about the spinners in their ranks and hoped they will produce the goods against India when they meet next week.

“We all know they play spin well. But so do we, we play spin very well and played it well against Afghanistan,” said Joshi, who has played 15 Test and 69 ODIs for India between 1996 to 2001. ALSO READ: Shakib Al Hasan stars as Bangladesh beat Afghanistan by 62 runs

“We have shown in the white ball formats here and before this how we are a good side, we won in Ireland, we have beaten West Indies home and away and come close to beating India three times in the past three years.

“We have our own brand of cricket we are playing with the likes of Liton Das, Mushfiqur Rahim, Soumya Sarkar, Tamim Iqbal, then Mashrafe Mortaza with the ball, and the others.”

Afghanistan had troubled India at The Ageas Bowl, restricting them to 224 for 8 and Joshi admitted he would enjoy a similar surface at Edgbaston.

“We have quality spinners, the same as India,” added Joshi.

“How do you deal with them? Facing them and bowling to them it is the same. You think of it one ball at a time.

“Every team has their strengths and weaknesses. I have seen India very closely when we have played them. We know where to bowl to them.” 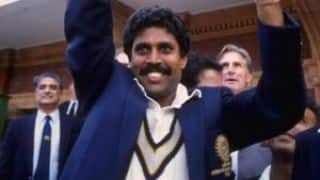 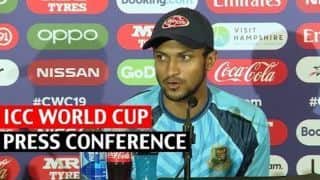