Ahead of the ICC World Cup 2019, here s a recap of how past Bangladesh teams have fared at the World Cup.

Bangladesh were not a member of the ICC in 1975 and as a result, they were not eligible to participate in the first World Cup. The Tigers failed to qualify for the next five World Cups from 1979 to 1996.

Bangladesh appeared in their first World Cup in 1999. Ahead of the ICC World Cup 2019, here s a recap of how past Bangladesh teams have fared at the World Cup.

Bangladesh played their first World Cup match in 1999 against New Zealand at County Ground in Chelmsford which they lost by six wickets. They tasted their first World Cup victory against Scotland in their third group match thanks to Minhajul Abedin‘s unbeaten 68 that paved the way for a 22-run win. They slumped to a seven-wicket defeat against Australia but finished the group stages at the fifth position which was not enough to seal a qualification berth.

After a decent showing in their maiden World Cup appearance, Bangladesh had a nightmarish in 2003 losing five of their group matches. One was washed out leading the Tigers to firmly occupy the bottom place.

ALSO READ: ‘Shakib Al Hasan had an off day against India in warm-up but he will do something big in World Cup’

For the first time, teams were divided into four groups consisting four teams in the 2007 edition. Bangladesh were placed into Group B along with India, Sri Lanka and Bermuda. Bangladesh stunned heavyweights India by five wickets. They carried the momentum and reached the Super Eights for the first time after defeating Bermuda by seven wickets. In the Super Eight round, they created another upset defeating South Africa by 67 runs. However, that was their only victory.

Despite having the advantage of playing this edition of the World Cup on home soil, Bangladesh failed to get past the group stages. They lost their opening match to India by 87 runs. It was in this match where Virender Sehwag scored 175 and Virat Kohli became the first batsman to score a century on World Cup debut. In their next match against Ireland, Bangladesh won by 27 runs. In their third group match, Bangladesh were humbled by the West Indies in an embarrassing nine-wicket defeat. In their last group match against South Africa, Bangladesh yet again suffered a drastic batting collapse being bowled out for just 78 runs and eventually lost the match by 206 runs thus shattering their hopes of qualifying for the quarter-finals.

Bangladesh had a dream 2015 World Cup when they made it to the quarter-finals. In their first group match Bangladesh pipped Afghanistan, appearing in the World Cup for the first time, comprehensively by 105. Their next match against Australia was washed away. In their third match, Bangladesh were outclassed by Sri Lanka batsman, who piled 332/1 in 50 overs. In reply, Bangladesh could only manage 240 runs in 47 overs before being all out. Bangladesh created history chasing 319 runs against Scotland to record their highest ODI run-chase and the second highest run-chase in World Cup history. In their knockout match, Bangladesh faced India. Batting first, India posted 302 runs in 50 overs for the loss of six wickets that came on the back of a fine century by Rohit Sharma (137). In reply, Bangladesh suffered a top and middle order collapse and were skittled for 193 runs in 45 overs. 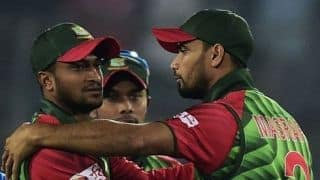 Cricket World Cup 2019: Shakib Al Hasan had an off day against India in warm-up but he will do ‘something big’ in World Cup: Mashrafe Mortaza