Indian team physio Patrick Farhart soon attended to Rahul, who limped off the field in pain. Ravindra Jadeja replaced him on the field.

KL Rahul seemed to be in some discomfort during India s match against hosts England in Match 38 of the ICC Cricket World Cup 2019 at Edgbaston in Birmingham on Sunday.

Rahul, who was stationed on the long-on boundary, tried to take a catch that was smashed by Jonny Bairstow off Yuzvendra Chahal in the 16th over, but while attempting the catch, he fell backwards and injured his lower back in the bargain.

Indian team physio Patrick Farhart soon attended to Rahul, who limped off the field in pain. Ravindra Jadeja replaced him on the field.

Later on, BCCI issued a statement on Rahul s injury status. KL Rahul landed on his back while attempting a catch at the boundary. He is being treated and assessed. He is expected to be back, read the statement.

Harsha Bhogle on air mentioned that Rahul s injury is an external one, so there will be no issue as far as him opening the innings is concerned. He can bat anywhere as well.

Opting to bat, England were off to a flier with Jason Roy, back in the side despite being 80 per cent fit after recuperating from a hamstring injury, forging 160 runs for the opening wicket with Jonny Bairstow. The dangerous partnership was broken by Kuldeep Yadav, but it was 12th man Jadeja, who picked up a stunner after he ran to his left from long-on, dived full length forward at full speed and took it inches from the ground. Roy departed for a well made 66 off 57.

England need to beat India and later New Zealand to ensure they go through. If not, Bangladesh, Pakistan and Sri Lanka continue to breathe down England s neck. Their problems are self-inflicted. 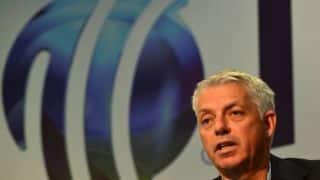 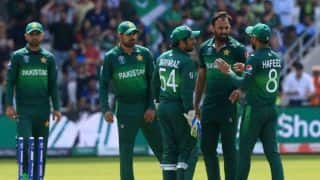