Carlos Brathwaite has been fined 15 per cent of his match fee for "showing dissent" during their ICC World Cup match against India.

West Indies allrounder Carlos Brathwaite has been fined 15 per cent of his match fee for “showing dissent” during their ICC World Cup match against India in Manchester.

Brathwaite was found to have breached Article 2.8 of the ICC code of conduct for players and player support personnel, which relates to “showing dissent at an umpire’s decision during an international match”.

In addition to this, one demerit point has been added to the disciplinary record of Brathwaite, who now has two demerit points since the introduction of the revised code in September 2016.

The incident occurred in the 42nd over of India’s innings, when Brathwaite protested the umpire’s decision of declaring a wide off his bowling.

Brathwaite admitted the offence and accepted the sanction proposed by Chris Broad of the ICC elite panel of ICC match referees, and as such, there was no need for a formal hearing.

Brathwaite had been handed one demerit point for a similar offence earlier in the tournament, in the league match against England on June 14 in Southampton. 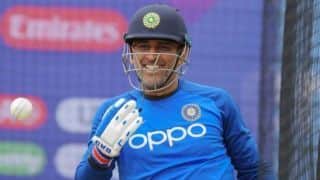