Bangladesh's group stage win against England four years ago proved to be a catalyst for the side, boosting their belief and triggering a sustained spell of success.

Bangladesh have set their sights on capping a remarkable rise by reaching the World Cup semi-finals for the first time.

Mashrafe Mortaza‘s side arrive in England confident of making the last four on the back of impressive form that marks them as a serious threat to the established order.

Bangladesh showed they can compete with cricket’s elite nations when they advanced to the Champions Trophy semi-finals two years ago from a strong group featuring England, Australia and New Zealand.

Significantly for their hopes in this edition of the World Cup, that memorable campaign came in England. It was also further proof of their emergence following a maiden World Cup quarter-final berth in 2015. (ALSO READ: Cricket World Cup 2019: All Bangladesh cricket records at World Cup most runs, wickets, catches, wins and more)

Bangladesh’s group stage win against England four years ago proved to be a catalyst for the side, boosting their belief and triggering a sustained spell of success.

All of those series were played at home but it was still a huge sign of progress for a Bangladesh team considered as international whipping boys not so long ago.

The series wins helped Bangladesh climb the rankings, earning them automatic qualification for the Champions Trophy and the World Cup.

They maintained that consistency with 13 wins from their 20 one-day internationals in 2018 and are currently ranked seventh.

Bangladesh will carry plenty of experience into the tournament in the form of captain Mashrafe, vice-captain Shakib Al Hasan, Tamim Iqbal and Mushfiqur Rahim.

The solid performances in recent years, combined with the presence of the veterans, has created expectations of success for Bangladesh that were unheard of in the team’s five previous World Cups dating back to 1999.

Mashrafe says a semi-final place is their goal, but he admits it will be tough to get that far given the round-robin nature of the first stage of the10-team tournament.

“At the moment I think going to the semi-finals will be big challenge, but nothing is impossible,” Mashrafe said before leaving Dhaka for England.

“Of course it is possible, difficult though. In the past a win over one big team in the group stage might have been enough, it would have made a comeback difficult for them. But here we have nine games.

“Those who are expecting to play in the semi-finals they will have plenty of opportunities to come back. We have to be careful about it.” (ALSO READ: ICC ODI rankings: Shakib Al Hasan tops allrounder table ahead of Cricket World Cup)

While Bangladesh’s biggest strength is their team unity, they have weaknesses that might hurt them on the big occasion.

In an era when sides often chase down targets well in excess of 300 runs with ease, Bangladesh may lack enough big hitters to do that.

So far, Bangladesh have successfully chased a 300-plus target only twice, against low-ranked Zimbabwe and Scotland, a record Mashrafe concedes they must improve on in this World Cup.

“You see we are not accustomed to chasing 320 or 340. At the same time, we cannot restrict the opposition to 270 or 280 on a regular basis,” he said ahead of their World Cup opener against South Africa on June 2

“Here we have got to develop a habit. We have to fight giving everything we have.”

It also remains to be seen if Bangladesh’s players have completely recovered after they narrowly avoided being caught up in the New Zealand mosque attacks in March.

Many of the squad reportedly needed counselling to deal with the horrific experience before returning to domestic cricket. 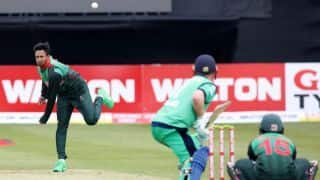 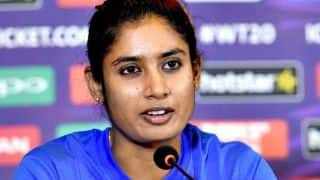