Jaykishan Plaha was hit by David Warner during the nets on June 8 at Kennington Oval.

LONDON: In a warm gesture at Kennington Oval on Saturday, Australia opener David Warner met the net bowler he felled during batting practice at this same venue a week ago and gave him an autographed Australian cricket team jersey ahead of his team’s ICC Cricket World Cup 2019 match versus Sri Lanka today.

Indian-origin Jaykishan Plaha, while bowling to Warner on June 8 at Kennington Oval ahead of Australia’s match against India, was hit by a firm drive from the left-hand batsman. He immediately fell to the ground, and Australia’s practice session came to an abrupt halt.

Plaha, a local Surrey league cricketer, received medical attention and was stretchered inside for further assessment. Though conscious, he was taken to a London hospital where he remained for a couple of days as doctors monitored him for delayed signs of concussion. A subsequent CT scan cleared Plaha of any major damage.

Warner, who at the time was described by Aaron Finch as “obviously pretty shaken up”, descended the steps from the Australian dressing room at 8:49 am on Saturday and embraced Plaha in a hug, looked on by his mother and brother.

The two shared a few words after Warner presented Plaha a signed Australian cricket team jersey, and then Warner spoke to Plaha’s family.

Since the day he hit Plaha in the Kennington Oval nets, Warner has scored 56 from 84 balls against India and 107 from 111 balls against Pakistan. 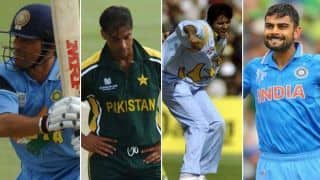