Both England and Bangladesh, who opened their World Cup 2019 campaigns with a win, suffered defeat in their second games. While England lost against Pakistan, New Zealand beat Bangladesh by two wickets.

After conceding a narrow defeat to Pakistan in their last World Cup fixture, England will look to bounce back against Bangladesh when the two teams meet at the Cardiff Wales Stadium on Saturday.

It was only Joe Root and Jos Buttler who kept them in the hunt with brilliant centuries that almost sealed the game until their lower order faltered.

However, captain Eoin Morgan put the onus of their defeat on their poor fielding. England let down a couple of catches and were sloppy in the field.

Jason Roy let down a rather easy catch of Mohammad Hafeez, who played a match-winning knock of 84 from just 62 balls and played a crucial role in Pakistan reaching around the 350-run mark.

On the other hand, Bangladesh failed to replicate their performance with which they had come out against South Africa in their tournament opener and lost a nervy battle to New Zealand in their last fixture. (ALSO READ: Cricket World Cup 2019: We couldn’t get any big partnerships: Mashrafe Mortaza)

Their bowlers have been able to put up a fine performance in both their outings. However, against New Zealand, their batsmen couldn’t convert their starts and failed to take their team to a significant total.

Going into Saturday’s game, skipper Mashrafe Mortaza will expect his openers and the middle-order batsmen to shoulder some responsibility alongside Shakib Al Hasan, who has been in prime form and set a decent total against the famed England batting line-up which is capable of posting as well as chasing any given target.

While Root and Buttler scored hundred, England could not get a strong start, something which has been a key to their recent success in the ODI cricket. For the two games in a row in the World Cup 2019, they have not enjoyed a solid opening stand. Coming to their bowling, while picking Mark Wood ahead of Liam Plunkett did not cost much England with the ball, England missed Plunkett, who has the ability to take wicket in the middle overs consistently. England may also want Jofra Archer and Adil Rashid among wickets. The two went wicketless against Pakistan.

While Shakib Al Hasan scores his second successive fifty in World Cup 2019, none of the other batsmen capitalise and score big despite getting a start. Although the bowlers tried their best against New Zealand, the fielding woes let Bangladesh down. They will be eager to rectify that bit against England. 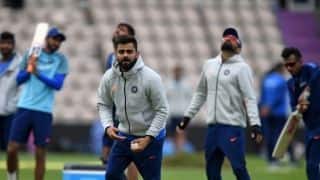 Batsmen have to put their hands up and do the job: Dimuth Karunaratne