The England captain was practising with his teammates at the Ageas Bowl in Southampton ahead of Saturday’s unofficial World Cup warm-up against Australia when he took a blow during catching drills.

Skipper Eoin Morgan is going to miss England’s first warm-up game against Australia ahead of the World Cup 2019 after being hit on the left index finger during the fielding practice in Southampton on Friday.

However, Morgan will be fit to play in the main event. The host nation play the opening match of the World Cup against South Africa on May 30. There is no confirmation yet about his participation in England’s second warm-up match against Afghanistan.

“He will not take part in the match, but is expected to make a full recovery and be available for England’s opening ICC Men’s Cricket World Cup match against South Africa at The Oval on Thursday, May 30,” a statement from the ECB said.

🗣 "The digit is the best I could have hoped"@Eoin16 puts a nation's fears to rest and confirms that he will be right for the opening match of #CWC19 despite suffering a dislocated and minor finger fracture at training. pic.twitter.com/PYx5qSYtC4

Morgan underwent “a precautionary X-ray”. The England captain was practising with his teammates at the Ageas Bowl in Southampton ahead of Saturday’s unofficial World Cup warm-up against Australia when he took a blow during catching drills. (ALSO READ: Scare for England as skipper Eoin Morgan to have X-ray after injury in training)

Morgan, 32, was one of 14 players preparing at Hampshire’s ground, with Joe Root absent on personal business.

England have climbed to the top of the one-day international rankings under the leadership of Morgan, who is also a key member of their powerful batting line-up.  (ALSO READ: Cricket World Cup 2019: Top-ranked England in prime shape for maiden trophy)

England spinner Liam Dawson did not witness the incident but said the feeling from his team-mates was the Dublin-born left-hander’s injury was not serious.

“I was batting on the other side, so I didn’t know what went on. When I came back to the dressing room a couple of the lads were talking,” Dawson said. (ALSO READ: Morgan defends decision to leave out Denly and Willey from World Cup)

“I just heard he got hit on the finger. I don’t think it’s too bad.” 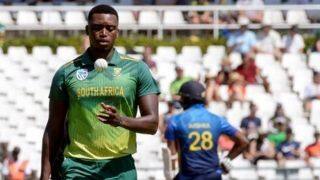 SL vs SA LIVE streaming, Cricket World Cup 2019 Warm-up match: Teams, time in IST and where to watch on TV and online in India