By beating England at Lord's, Australia became the first team to make it to the World Cup 2019 semifinals.

David Warner may not have been his usual self in some of Australia’s ICC Cricket World Cup 2019 games despite leading the run chart, but skipper Aaron Finch Tuesday backed his opening partner, saying the pitches used “demanded respect”.

Finch (100) and Warner (53) added yet another century stand to lay the foundation for Australia’s 64-run victory over arch-rivals England at the Lord’s and become the first team to reach the semifinals.

“People are saying it’s not the Warner of old, but the wickets we’ve got in this tournament have demanded respect. He looked at his best today,” Finch said at the presentation ceremony.

“There’s plenty to suggest that the way to go about it is the right way to do it. You’re looking to be positive, but he got us off to a good start. We’re confident with what we’ve got, and we’ve won five World Cups in our history.”

ENG vs AUS: As it happened

On reaching the last four, Finch said, “That’s the first part ticked off, which is a really nice feeling. I think England are a stand-out side who can take you apart with ball and bat quite quickly. It was nice that we found ways to keep getting wickets.”

He was full of praise for his bowlers, especially Jason Behrendorff (5/43), who was ably supported by Mitchell Starc (4/44).

“Behrendorff bowled beautifully, we’ve you’ve got a guy who can swing the ball back down the line to the right handers, that’s an asset.

England skipper Eoin Morgan admitted they were outclassed. “I thought a lot of today we were outplayed, Australia played and missed a lot and built a good partnership, and us losing early wickets wasn’t ideal,” Morgan said.

“The wicket was soft when we started, batting would have been a horrific decision. They dominated until the 25th but to restrict them to 280 was a good effort.

“But to be 20 for 3 pegs us bad considerably. Given the circumstances it’s not hugely disappointed, our fate is in our own hands.” 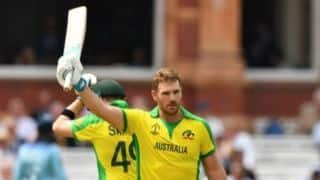 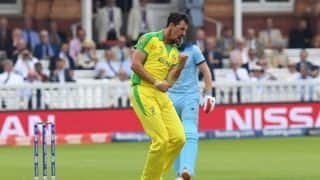