England edged out New Zealand in a Super Over to win the World Cup 2019.

England‘s men of the moment Ben Stokes and Jofra Archer could hardly speak but in between their emotions, both said it is the proudest day of their lives as the hosts won their maiden World Cup, beating New Zealand in a Super Over at the Lord’s Cricket Ground in London on Sunday.

“I’m pretty lost for words. All the hard work that’s gone on in these four years, and to execute with such a good game is unthinkable,” Player of the Match Stokes said.

“Thanks to everyone for all the support. We just kept talking during the partnership with Jos, and the run-rate wasn’t getting away, and in the last over when the ball hit the bat and went for four – I apologise to Kane (New Zealand skipper Kane Williamson) for that. “It’s fantastic, without the lads, the family, and the support, it’s just been incredible,” he added.

Cricket World Cup 2019, ENG vs NZ Final: As it happened

On his part, Archer said: “Pretty sure I was going to bowl it (the Eliminator). Just had a double-check with Morgs (Captain Eoin Morgan). Still racing (heartbeat). Probably the biggest thing (in my life). The way the guys started in this tournament from the beginning, would’ve been disappointing not to win. They’ve been a family to me.”

After the rip-roaring final which saw both sides’ fate ebb and flow till the last ball, Archer had to defend 15 runs in the Eliminator and in the end, he and England emerged victorious.

Electing to bat first, New Zealand put up 241/8 in 50 overs. Chasing the target, England rode Stokes’ unbeaten 84 off 98 balls with Jos Buttler also scoring 59. The pair added 110 runs for the fifth wicket to tie the game at 241 all out and take it to a Eliminator.

In the Eliminator, Stokes and Buttler helped England post 15 which New Zealand matched but in heart-wrenching fashion, fell behind due to inferior position in the points table. 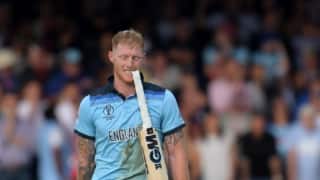