Defeat could leave Australia with a seemingly tougher last-four showdown against resurgent hosts England at Edgbaston on Thursday.

South Africa captain Faf du Plessis led from the front with a century and Rassie van der Dussen made a superb 95 as the Proteas piled up 325/6 against Australia in the last group game of the ICC Cricket World Cup 2019 at Old Trafford in Manchester on Saturday.

Reigning champions Australia, already through to the semi-finals, need to win to be certain of finishing top of the 10-team table. That would ensure they return to Old Trafford for a semi-final clash with fourth-placed New Zealand a team they thrashed by 86 runs at Lord’s last week.

But defeat could leave Australia with a seemingly tougher last-four showdown against resurgent hosts England at Edgbaston on Thursday.

Mitchell Starc equalled Australia legend Glenn McGrath’s record of most wickets at a World Cup tournament, set at the 2007 event in the Caribbean, when he moved to 26 wickets at this edition with a return of 2/59.

But Australia still faced a huge chase, with the highest total made batting second to win a World Cup match the 329/7 posted by Ireland against England at Bangalore in 2011.

South Africa’s chances of going through to the knockout phase had long evaporated before this match, with the Proteas having won just two of their previous eight games.

But that did not stop du Plessis, who won the toss, and van der Dussen putting on 151 for the third wicket in front of a sun-drenched crowd.

It might have been a different story, however, had Australia wicketkeeper Alex Carey not missed a chance to stump van der Dussen off spinner Glenn Maxwell when the batsman had made just four.

Aiden Markram, only opening after Hashim Amla was ruled out with a knee injury playing football in a warm-up on Friday, set the tone for South Africa with two well-timed boundaries.

But du Plessis completed his third successive fifty and fourth of the tournament before he advanced down to drive fast bowler Pat Cummins for a superb six. He then posted the first hundred by a South African at this World Cup when he drove Jason Behrendorff for a single to reach the landmark in 93 balls, with seven fours and two sixes. But he was out to the next ball he faced, slicing Behrendorff to third man.

Van der Dussen should have been run out for 77 but Steve Smith missed with a wild shy when he had time to underarm the ball.

Van der Dussen then just fell short of his maiden ODI hundred when, trying to hit the last ball of the innings for six, he holed out to Maxwell off Cummins. He faced 97 balls including four fours and four sixes, with the 30-year-old now boasting an impressive ODI average of 73.77 from 14 innings. 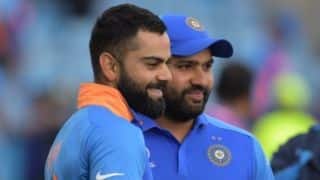