While England came close to chase down the 349-target, Pakistan managed to pip the Eoin Morgan-led side by 14 runs and ended their 11-match losing streak in the sixth match of the ICC Cricket World Cup 2019 at Trent Bridge in Nottingham on Monday.

Pakistan, who were bundled out for 105 in their previous game against West Indies, put up a solid batting show to put up 348 runs on the board. England, meanwhile, were extremely sloppy in the field and Morgan said that it was the difference between the two sides.

While the likes of Morgan, Jonny Bairstow, Jason Roy and Ben Stokes failed with the bat, Joe Root and Jos Buttler s hundred kept England in the game. However, as the two fell soon after their respective hundreds, Pakistan went on to win the what Morgan termed as the very good game of tournament . (ALSO READ: Cricket World Cup 2019: Old hands Mohammad Hafeez, Wahab Riaz lead Pakistan to 14-run win over England)

(It was a) Very good game of cricket. Great advert for the tournament. Extremely disappointed to be at the wrong end especially when it got so tight, said Morgan.

Trent Bridge is a high-scoring ground. (I) Wasn’t concerned with 350. Wicket was very good, outfield was rapid. We felt if we got going, 350 was achievable. Losing early wickets isn’t ideal. Joe (Root) and Jos (Buttler) kept us in it as far as the 40th over, continued Morgan.

They bowled well. We got a considerable partnership to stay in the game. All round today we weren’t that bad. Pakistan played well, added the England skipper. (ALSO READ: Cricket World Cup 2019: It s a very happy dressing room, says Hafeez as total team effort seals Pakistan s win over England)

With all the teams are going to play nine matches in the league stage of the tournament before the top four going to enter the semi-finals, Morgan said that not many teams will go unbeaten.

Sides will beat each other. Don’t think many sides will go unbeaten. Going to be a competitive tournament. Looking forward to Bangladesh, concluded Morgan. 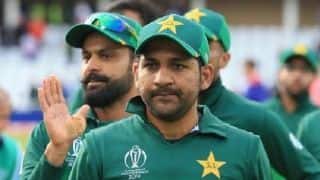