Put in ti bat, Pakistan batsmen, who had a torrid time in the game against West Indies, came good.

Mohammad Hafeez, Babar Azam and Sarfaraz Ahmed scored fifties as Pakistan scored 348/8 against England in the sixth match of the ICC Cricket World Cup 2019 at Trent Bridge in Nottingham on Monday.

Having failed with the bat in their previous game against West Indies, Pakistan had a point to prove as they took on England in the second match of the World Cup and their openers Fakhar Zaman and Imam-ul-Haq set the tone.

While England tried to test them with the short-pitched deliveries, the left-handers were up to the task. The two played their shots and did not let England bowlers to have an upper hand as Pakistan zoomed to 69 after 10 overs, with Fakhar scoring 31 from 26 balls and Imam adding 30 runs in 34 deliveries.

However, England managed to end the 82-run opening stand, after keeping the things tight from the 10th-14th over, conceding just 15 runs, as Jos Buttler s brilliant work, off Moeen Ali s bowling, behind the stumps caught Fakhar short of his crease. (Cricket World Cup 2019, ENG vs PAK: FOLLOW LATEST UPDATES)

Chris Woakes then, fielding in the deep, covered the ground and took an excellent catch, diving sideways, as Moeen scalped his second wicket, dismissing Imam for 44.

Imam perished in the 21st over and England had a chance to land another blow in the 25th over. But Jason Roy, fielding at long-off, dropped an easy catch off Adil Rashid s bowling as Babar, then batting on 29, got a reprieve.

Hafeez, meanwhile, brought up his half-century, his 39th in ODIs as he and Sarfaraz kept the scoreboard ticking. While there were not too many quick singles or doubles, the two did not miss out on hitting fours at regular intervals as Pakistan moved past 250 in the 40th over.

The Sarfaraz-Hafeez duo added 80 runs together. But just when it looked that the two will take the game away from Pakistan, Woakes took another fine catch, this time off Mark Wood s bowling, to dismiss Hafeez. The right-hander scored 84 off 62 balls, hitting 8 fours and 2 sixes.

Hafeez’s dismissal though did not slow down Pakistan as Asif Ali, who replaced Haris Sohail in the playing XI, and Sarfaraz, who notched up a fifty, took Pakistan past 300 in the 46th over.

Shadab Khan and Hasan Ali though hit some big blows in the last few overs and pushed Pakistan past 340-run mark. 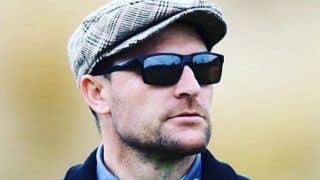 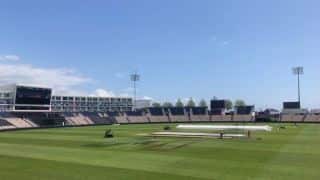