Jason Roy, who scored a century in England's win against Bangladesh, also pulled up with an injury in the eighth over and had to leave the field.

While England outplayed West Indies to register an eight-wicket win at The Rose Bowl in Southampton in the ICC Cricket World Cup 2019 on Friday, they had multiple injury scares as skipper Eoin Morgan and Jason Roy left the field during the West Indies batting.

Roy, who scored a century in England’s win against Bangladesh, pulled up with an injury in the eighth over and had to leave the field.

Morgan hobbled off the pitch in the 40th over, struggling to make his way up the pavilion steps.

Morgan had suffered a back spasm and was unable to bat for 28 minutes at the start of England’s innings because he was off the field for that time.

“I’m a bit stiff and sore, had a bit of a back spasm which hasn’t settled down yet,” Morgan said after England sealed their third win of World Cup 2019.

“I get them two or three times a year and unfortunately it’s come now, hopefully it settles down in the next 48 hours.”

Joe Root starred with the bat and ball while Jofra Archer and Mark Wood scalped three wickets each to set up England’s win.

Root scored his second century of the World Cup as England crushed the West Indies, with 16.5 overs to spare.

The host nation won the toss and made the most of favourable bowling conditions on a day when the rain finally relented, bowling the West Indies out for 212. 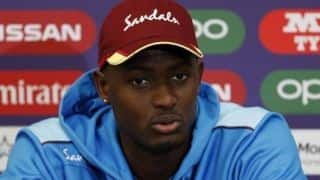