England skipper, Eoin Morgan, meanwhile, will be monitored over the next 24 hours. He had suffered the back spasm during England's game against West Indies.

England batsman Jason Roy, who left the field during West Indies innings in the ICC Cricket World Cup fixture on Friday due to left hamstring tightness, underwent an MRI scan on Saturday in London, said England and Wales Cricket Board (ECB) in a media release.

The MRI confirmed that Roy has suffered a hamstring tear. As a result of the injury, he will be reassessed on an ongoing basis this week. He is set to miss England s next two matches in the ICC Cricket World Cup against Afghanistan (18 June) and Sri Lanka (21 June), added ECB.

Meanwhile, Eoin Morgan, who had left the field after suffering back spasms during the West Indies game, will be monitored over the next 24 hours ahead of England s clash against Afghanistan.

In Morgan’s absence wicketkeeper-batsman Jos Buttler led the team in the remainder of the game against the Jason Holder-led unit.

England captain Eoin Morgan, who left the field during West Indies innings in the ICC Cricket World Cup fixture on Friday due to a back spasm, underwent a scan this weekend and further treatment, said ECB.

The spasm has settled down and will be monitored over the next 24 hours ahead of England s next match against Afghanistan tomorrow (Tuesday) at Old Trafford, Manchester, concluded ECB. 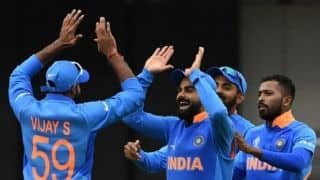